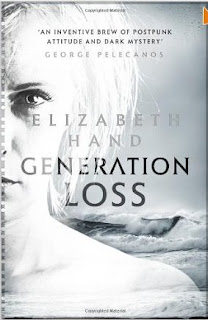 When Cass Neary was young, in the avant-garde of New York’s 70s punk scene, her photographs of the recently dead earned her cult status; she was, so it seemed, on the crest of a wave. But thirty years later, Cass, after a lifetime of drink, drugs and fleeting relationships, is alone, adrift and virtually forgotten. So when an acquaintance asks her to interview a fellow photographer, Aphrodite Kamestos, once even more famous than Cass but now a recluse and living on an island off the coast of Maine, Cass accepts: she needs the money, she needs to get out ofNew York, she needs to get away from memories too sad to bear. The island - Paswegas Island - is bleak and remote, the few people living there mostly unwelcoming.

It becomes clear that Paswegas is defined by its past when Aphrodite established a commune which attracted numerous artists, hippies and beatniks. Unpopular with most of the locals, the commune eventually failed and now only a few of its inhabitants remain. Gradually Cass is drawn into a decades-old tragedy and its continuing effect on the islanders, and the question of whether there is a connection between that tragedy and a number of disappearances in the intervening years, especially that of a young girl who worked at the hotel where Cass spent a night and for whose disappearance she feels partly responsible.

Although there is a mystery and an exciting denouement, this is essentially a literary novel which unravels Cass’s character, formed by her tormented past, and sets it in the context of the island’s mysterious and sinister past and present. Even the book’s title - Generation Loss - is significant: it refers to the loss of quality between subsequent copies of data, including photographs but also the loss of a generation of young people . . . which includes Cass herself. Not comfortable reading, but providing plenty of food for thought.
------
Reviewer: Radmila May

Elizabeth Hand was born in Yonkers, New York on 29 March 1957. She grew up in Yonkers and Pound Ridge, New York, and  studied drama and anthropology at The Catholic University of America. Since 1988, Hand has lived in coastal Maine, the setting for many of her stories.