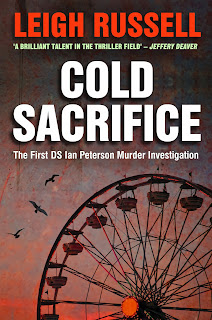 The first in the series featuring DS Ian Peterson finds him deep in marital difficulties. Although it seems he is bending over backwards to accommodate Bev’s needs, he has a demanding job which calls for unsociable hours.  So the discovery of the dead body of a middle-aged woman in a local park can only put further strain on his marriage.

When the victim is identified, the husband is the first suspect, but he has an alibi. However in trying to be clever he puts himself in a vulnerable position, and a second murder brings his alibi into question.

Ian was used to discussing cases with Detective Inspector Geraldine Steel, but his new boss, tall, thin grey-haired Rob Wellbeck is unresponsive, so Ian is glad that he has chirpy female constable Polly Mortimer to bounce ideas around with.”

A third murder puts pressure on the whole team but particularly on Ian as he struggles to balance the demands of a murder enquiry with love for his wife. If only his promotion to Inspector would come through, for he is hopeful that it will make all the difference.

A complex mystery rich in characters, this new series promises some interesting times ahead for Ian Peterson in both his work and personal life.  Cleverly constructed, although the mystery is satisfactorily resolved, it leaves a hook for further related events. I look forward to the next in the series.
------
Reviewer: Lizzie Hayes 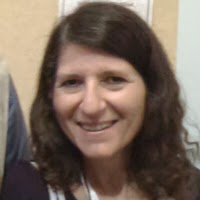 Leigh Russell studied at the University of Kent gaining a Masters degree in English and American literature. Her first novel, Cut Short, was published in 2009, followed by Road Closed in 2010, Dead End in 2011, Death Bed in 2012 Her latest book Stop Dead, was published May 2013. Cold Sacrifice the first in a new series featuring Ian Peterson.
In addition to her writing Leigh is a secondary school teacher, specializing in supporting pupils with Specific Learning Difficulties as well as teaching English, Leigh Russell is married with two daughters and lives in Middlesex.
Christine Brett has two problems: one, her disempowering divorce and the other, caring for her invalid mother, Emily. Christine becomes obsessed with Neighbourhood Watch and reports her neighbours for trivial offences. Visiting the local supermarket she witnesses a robbery, and is distressed to find the face of the getaway driver alarmingly familiar. But her reputation with the local police for crying wolf has preceded her and no one will take her seriously. But Christine is right to be afraid: if she can identify the getaway driver, then it's likely that he has also seen her. And if she is the sole witness, he will do his utmost to silence her...