‘Blood on the Wall’ by Jim Eldridge 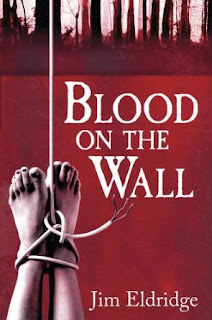 Inspector Andreas Georgiou of Carlisle CID is sitting on a bench looking out over the Solway Firth contemplating his suspension from the police force for alleged brutality, and the possibility that he would be forced at thirty-four years of age to take early retirement from the job he loves, when a call from the chairman of the police authority has him back on the job to find the killer of an eighteen-year-old girl.

The girl’s body is headless as was the body of a woman found in Northumberland a month ago.  Is this the work of the same person? Andreas means to find out. As the team investigation they are struck by the fact that the locations of both murders are along the line of Hadrian’s Wall, so are these ritualistic killings?

This is a good police procedural with a likable protagonist who is considered an outsider. Andreas born in London to an English mother and a Greek waiter has never been to Greece, but when he gives his name he is assumed to be foreign and has never totally fitted in.

With two murders to solve, a superior officer who wants him off the force, and the accusation of brutality hanging over him Andrea has his work cut out. DS Debby Seward, thirty-one years old has a yen for Andreas but can she break through his reserve built up through years of being an outsider?

I greatly enjoyed this book and heartily recommend it.
------
Reviewer: Lizzie Hayes

Jim Eldridge was born in the Kings Cross/Euston area of north London in November 1944. He left school at 16 and did a variety of jobs, before training as a teacher. He taught during the 1970s in disadvantaged areas of Luton, while at the same time writing. He became a full-time writer in 1978. He has had 80 books published which have sold over two million copies. He has had over 250 TV and 250 radio scripts broadcast in the UK and across the world. He lives with his wife in Cumbria; and is an associate lecturer at the University of Cumbria.

http://www.jimeldridge.com
Posted by Lizzie at 15:48