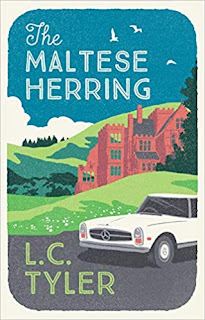 Attending a reunion dinner at his old college, Ethelred Tressider is both surprised and pleased to find himself elevated to top table where the chairs are comfortable unlike his usual placing at one of the long shiny oak tables with hard benches. However, he realises that he is positioned with the least distinguished of the guests. On one side is the elderly wife of a long dead fellow and on the other Dr Hilary Joyner - neither liked nor respected by his peers, but still determined that his next venture will bring him the recognition he feels he deserves.

When Ethelred had been an undergraduate Hilary Joyner had been a rather natty young don. An historian, since then he had written books that had been overlooked and was currently working on another about the English monasteries. After dessert Joyner turned his attention to Ethelred and explained that he was approaching the subject of his next book with a new angle - an alleged dispute between two monastic houses in Sussex. ‘You mean the ‘buried treasury story’ said Ethelred.  ‘I’m afraid Iris Munnings won’t allow any sort of access to the priory’. His words galvanised Joyner  especially when it emerged that Ethelred lives in West Wittering, the village with the priory. Despite Ethelred’s excuses about the urgency of finishing his next book, and the slightness of his acquaintanceship with Iris Munnings, he finds to his horror that Joyner has decided to stay with him.  As he grapples with this situation his phone beeped with an incoming text from his agent, whom he had just that day emailed ‘that a visit this weekend was out of the question’ announcing ‘coming as planned Friday.’ Elsie xxx

Dr Joyner and Elsie Thirkettle do not actually initially hit it off at once, (which is a fascinating story in itself). But soon all three are in pursuit of the missing Maltese Madonna despite the curse carried by the statue of misfortune and possibly a horrible death to any owner.  Into the mix come Henry Polgreen, chairman of some obscure committee and Tertius Sly, who had for some years aspired to unseat Henry and take over the chairmanship himself.  Eventually they all fetch up at Iris’s where they encounter Professor Cox much to the chagrin of Joyner. But their quest comes to an abrupt halt with Joyner’s death. Not a nice way to go.

Once again Ethelred finds himself sleuthing with Elsie.  The search for both the Maltese Madonna and the murderer carries them into uncharted territory, and we meet more engaging characters along the way, before the killer is found.   Clever, witty and funny. Yes, I loved this book and I am already looking forward to the next adventure of Ethelred and Elsie, even if Ethelred isn’t. Most highly recommended.
------
Reviewer: Lizzie Sirett

L. C. Tyler was born in Southend, Essex, and educated at Southend High School for Boys, Jesus College Oxford and City University London. After university he joined the Civil Service and worked at the Department of the Environment in London and Hong Kong. He then moved to the British Council, where his postings included Malaysia, Thailand, Sudan and Denmark. Since returning to the UK he has lived in Sussex and London and was Chief Executive of the Royal College of Paediatrics and Child Health for eleven years. He is now a full-time writer. His first novel, The Herring Seller's Apprentice, was published by Macmillan in 2007, followed by A Very Persistent Illusion, Ten Little Herrings, The Herring in the Library, Herring on the Nile, Crooked Herring, Cat among the Herrings and Herring in the Smoke. The first book in a new historical series, A Cruel Necessity, was published by Constable and Robinson in November 2014. Since then he has published four further books in this series. The latest being The Bleak Midwinter. His latest Ethelred and Elsie is The Maltese Herring.