‘Unfollow Me’ by Charlotte Duckworth 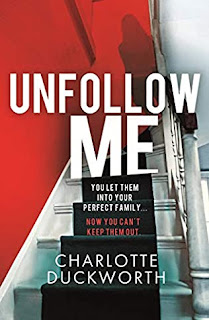 The author worked as a lifestyle and consumer affairs journalist before she switched to writing psychological suspense.  This is her second novel and is about the dangers of social media, a growing topic that’s trending strongly now in the world of books.

Violet Young is a popular, almost celebrity, influencer and mummy vlogger who has it all. With Henry her handsome, wealthy husband, three gorgeous kids, a large, stylish London house, a huge, adoring die hard band of followers, and a million subscribers on YouTube, Instagram and Twitter, she’s no shrinking violet and doesn’t shy from baring and sharing every trivia of her family’s everyday doings. Until…   her online social media presence is shut down overnight with no apology and no explanation for the decision to go offline.

Her fan base is bereft of its daily fix and the buzz of chilling conspiracy theories becomes more strident. What’s happened? Where’s Violet?  Has she met with a dreadful accident? Has a crazed stalker murdered her?

Very quickly one is drawn into what promises to be a fascinating domestic noir. Two women on the GoMamas forum scramble to unravel the mystery and the narrative is projected through the impressions and voices of Lily and Yvonne, both damaged and obsessive in their own way. Henry, flawed and despicable, puts in his oar from time to time and eventually the author introduces Violet in a cameo role.

The premise is intriguing and timely, the world of social media is penetratingly observed, and the author skilfully integrates the characters, none of which is particularly likeable. Juicy online exchanges between subscribers are compelling and realistic. That said, however, some readers might find that the fast, dark pace and crescendo of the early chapters soon begins to flatten and the book, although competently written, may possibly be not quite the outcome they expected.
------
Reviewer: Serena Fairfax

Charlotte Duckworth studied Classics at Leeds University and then completed a postgraduate diploma in magazine journalism. For the past 15 years she has worked as an interiors and lifestyle journalist, writing for a wide range of consumer magazines and websites. She lives in Surrey with her partner and young daughter.