‘The Port of London Murders’ by Josephine Bell 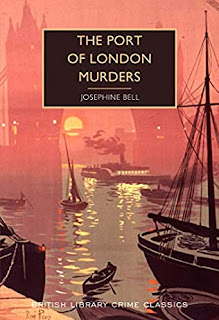 
A cargo ship, laden with a ‘mixed cargo’ from the East, having survived storms in the Bay of Biscay, arrives in the Port of London. A telephone call to an office in the City announcing its arrival is welcomed with relief. A spoilt society girl is desperate for . . . something which a man called Gordon Longford promised to supply to her . . . later. And a lorry driver called Harry Reed rescues a young woman called June Harvey and her cheeky young brother Leslie from the Thames. A destitute woman begs Gordon Longford for money to buy . . . something, instead he gives her the address of a local doctor, a Dr Ellis, who will give her that . . . something. She is later found dead, thought to be suicide, although the post-mortem also finds heroin.

Gordon Longford appears again, this time in pursuit of June Harvey who works in an upmarket lingerie shop to which he supplies in particular exquisite nightdresses. June, however, tolerates him for a while but rebuffs him in favour of Harry. Meanwhile Divisoinal Detective Sergeant Chandler is investigating the death of the woman who committed suicide; he is not altogether happy about the role of Dr Ellis who has not been altogether truthful. Later, however, Chandler disappears and the police enquiries gather momentum and a whole network of crime is revealed.

Although this novel was published in 1938 towards the end of the Golden Age of crime fiction, it is very unlike other Golden Age titles in that it has a solidly working class setting, taking place in the impoverished community living alongside the River Thames in conditions that seem almost unbelievable nowadays. This was particularly true when it came to access to medical care. There was then no National Health Service and there is a harrowing description of the numbers of people seen by a doctor at the Public Assistance Office, the majority old destitute men and women supplementing their meagre old age pensions with a few free tickets for food and a handful of coals granted to them by the Poor Administration. Others were those who were not old but who were unable,  struck down in youth or middle age by tuberculosis, rheumatism, heart trouble and so on, and had come to the end of their resources, their insurances, and their capacity to earn. The author, as a London doctor, would have been very much aware of the conditions in which the poor lived, and she also stresses their innate resilience, often manifested in a dry humour, and strong solidarity which kept them going.
Recommended.
-------
Reviewer: Radmila May

Josephine Bell was born Doris Bell Collier in Manchester. She studied at Godolphin School, then trained at Newnham College, Cambridge until 1919. At the University College Hospital in London she was granted M.R.C.S. and L.R.C.P. in 1922, and a M.B. B.S. in 1924.

Radmila May was born in the U.S. but has lived in the U.K. since she was seven apart from seven years in The Hague. She read law at university but did not go into practice. Instead she worked for many years for a firm of law publishers and still does occasional work for them including taking part in a substantial revision and updating of her late husband’s legal practitioners’ work on Criminal Evidence published late 2015. She has also contributed short stories with a distinctly criminal flavour to two of the Oxford Stories anthologies published by Oxpens Press – a third story is to be published shortly in another Oxford Stories anthology – and is now concentrating on her own writing.
Posted by Lizzie at 15:49