‘The Circle -A Killings’ by Sean Heary 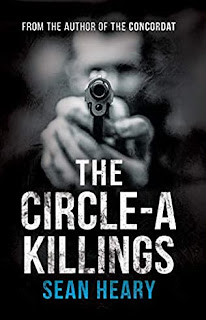 When Charles Edge is shot outside Covent Garden, he becomes the third American billionaire to be assassinated within two months.  Near the scene of each murder the police have found the sign of an ‘A’ drawn within a circle.  The CIA decide to act and a group of agents is despatched to London to find the killer, or killers, and stop the carnage.

Enter Lorenzo Rossi.  Rossi has been removed from his previous role as Inspector General of the Vatican Police and now holds the post of visiting academic at Cambridge University.  He is smarting not only because of his unfair redeployment, but also because he has been dumped by his fiancée – a sassy CIA agent called Cathy Doherty.  Rossi and Doherty met and fell in love when they teamed up together on a previous mission involving shady dealings by the Russian president, but when the assignment was over, Cathy called time on the relationship and Rossi was yesterday’s man.

The suave Italian is just settling into his new role at Cambridge when he is approached by one of the CIA agents and asked to help the team to infiltrate the group they believe is responsible for the assassinations. They have linked the sign found near the crime scenes to a group of anarchists based in Cambridge.  The agents are homing in on the group’s leader but need someone on the inside.  Rossi has the experience and a perfect cover.  The investigator turned academic agrees, only to find out later that Doherty will be working on the case alongside him.

Reunited, but not reconciled, Rossi and Cathy inveigle their way into the Cambridge circle.  The body count rises, however, and it soon includes their friends as well as some of their enemies.  The duo are undeterred and persist with their investigations despite putting themselves in jeopardy.  Then, as they get ever closer to discovering the perpetrators, they realise that they have walked straight into a trap from which there may be no escape.

The Circle-A Killings is Sean Heary’s terrific follow up to The Concordat which introduced the splendid Rossi and Doherty.  The on/off romance and sparring between the two protagonists’ teases and amuses in equal measure and provides an interesting sub-plot bubbling beneath the gritty thriller that drives the novel.  The writing is concise, controlled and fast-paced as the tension builds towards a blistering dénouement. It is a great read – I loved it!
------
Reviewer: Dot Marshall-Gent

Sean Heary was born and raised in Australia. He travelled the world  for 30years as a mining company executive who lived for many years only a stone’s throw from the Kremlin. No wonder he writes political thrillers. He also worked for several years in Tashkent, Uzbekistan, where he picked up a taste for Central Asian cuisine and met his wife.  Sean now makes Germany his home.