‘The Night of the Flood’ by Zoë Somerville 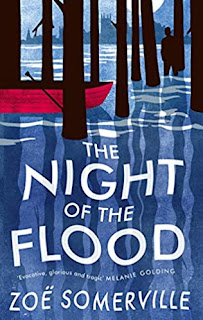 When is a crime novel not a crime novel? The easy answer is when there isn’t really a crime. But what if a crime does take place but the perpetrator gets away with it? Then, of course, it comes down to what we mean by getting away with it. So really, there’s no easy answer.

Zoë Somerville’s debut novel goes some way towards exploring this tricky issue, but you’ll have to decide for yourself whether she offers a satisfying answer. She also does a great deal more. This richly detailed novel explores complex relationships, the class divide, how a community deals with natural disaster and a handful of other issues, and weaves them into a story based around the catastrophic real-life flood which devastated the north Norfolk coast in real life nearly half a century ago.

The narrative is carried mainly by Verity, daughter of a well-to-do farmer close to the small coastal town of Wells, and Arthur, who was evacuated to the farm during the war and has now settled in the town with his ailing mother. Also in the foreground is Peter, Verity’s brother, who resents having to rescue the farm from the depredations caused by their father’s drink-sodden grief for their mother, who died in tragic circumstances not long before the story begins.

Enter Jack, an American airman based at an airfield not far away. He is a man of mystery; Arthur is an aspiring journalist, and itches to expose what he sees as the nefarious activities surrounding Jack’s inscrutable missions. What ensues is a tangle of relationships, some romantic, some not, others only in the mind; and it all comes to a head the night the flood causes havoc.

It’s a story full of atmosphere and emotional undercurrents, set against a bleak but vividly portrayed landscape. Every location stands out in three dimensions: the beautiful but crumbling farmhouse, Arthur’s mother’s overcrowded shop, a rundown shack in the woods which has greater significance than anyone imagines. The attitudes and prejudices of the early 1950s also come across loud and clear. And the author’s description of the flood itself is fascinating and horrifying in equal parts.

The leading characters are the kind you might have seen in the street half a century ago. Verity is bright, sociable, desperate to escape from her narrow life but conscious of the place she occupies in society. Arthur is left-wing, intelligent, optimistic, perceptive. Peter is less clever, made petulant by resentment. Jack is an enigma, but charming with it.

Whether their story adds up to crime fiction is the proverbial sixty-four thousand dollar question. A crime does take place, and there are hints of other less than straightforward doings. And of course, the 1950s were a time when the atomic bomb was in everyone’s minds; there’s a question mark over what exactly was going on at the American airbase. One thing is certain:  crime or not, it’s quality writing
.------
Reviewer: Lynne Patrick

Zoë Somerville is originally from Norfolk, She works as an English teacher. Having lived all over the world – Japan. France, Washington, she now lives in Bath with her family.  Zoë began her debut novel, inspired by her home county Norfolk, on the Bath Spa Creative Writing MA in 2016. She is currently working on her second – a ghost story.