‘An Inconvenient Woman’ by Stephanie Buelens 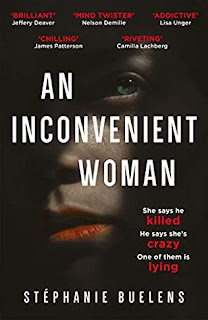 This book is suffused with reports and remembrances of abuse. But are they real or imagined?

Claire is a roving French teacher who lives and works in Los Angeles. She tells us her father abused her and tried to drown her when she was young. Later she was happy with her first husband, Max, and their daughter Melody.  Sadly, Max died when Melody was five.  After a few years Claire married again, this time to a rich lawyer called Simon. When Melody was thirteen, she told Claire that Simon had been behaving inappropriately towards her. Claire didn’t believe her daughter and Melody was subsequently judged to have committed suicide.  Claire feels guilty for not listening to Melody and is convinced that Simon drove Melody to her death. She divorces Simon but continues to keep an eye on him.

When Simon decides to marry again, Claire becomes agitated when she learns that his future wife, Charlotte, has a vulnerable young daughter. Simon maintains that he doesn’t understand Claire’s hostile attitude towards him, or why she should feel the need to warn Charlotte against him.  He hires Sloane Wilson, an ex-cop and the daughter of an ex-cop and instructs her to do whatever it takes to get Claire off his back. Simon chose well. Sloane has a lot of sympathy for him because many years ago, her own mother had ruined her beloved father’s career by reporting him for being a crooked cop - something Sloane has never believed. Her mother committed suicide and left seven-year-old Sloane, and her father to survive on their own.  Sloane has never forgiven her mother for this betrayal. She merges her hatred of her mother into hatred of Claire whom she believes is now trying to do the same thing to Simon.

The result is that we have Sloane, who worships the memory of her father and hates her dead mother, investigating the behaviour of Claire who hates her father – he is still alive – and is supposedly terrified that Simon will abuse Charlotte’s daughter. Given Sloane’s bias against Claire it is hardly surprising that her tactics for silencing Claire are unconventional and leave much to be desired.  They also reveal much about historical abuse and policing in LA that Sloane would probably rather not have learnt.

Claire’s pupils provide a wide variety of additional characters as she drives around giving her French lessons.  Her friend, Ava, tries - largely unsuccessfully - to steady Claire and to introduce reality during their weekly lunchtime meetings.  She also introduces what seems to be a promising romantic liaison for Claire.

In An Inconvenient Woman Stephanie Buelens rachets up the tension so efficiently that whether or not you believe Claire’s accusations against Simon, whether or not Claire’s accusations are rational or irrational, whether or not Simon is a caring individual or a master manipulator, it seems that the outcome is absolutely inevitable.  It isn’t and it wasn’t. I was a little surprised by the ending, but those who like all the loose ends neatly tied up will be happy. I wouldn’t hesitate to recommend this masterpiece of apparent inevitability and tension building to anybody who is prepared to be jogged out of their habitual comfort zone. There is comfort in this book – you may have to go a long way to find it, but it’s well worth the effort.
------
Reviewer Angela Crowther.

Stéphanie Buelens was born in Belgium and educated in France. She has travelled to more than thirty countries. For the last twenty years, she has lived between Paris and Los Angeles. She has worked as an actress, interpreter, translator, business consultant, French media coach, and language instructor. She currently lives in Belgium.

Angela Crowther is a retired scientist.  She has published many scientific papers but, as yet, no crime fiction.  In her spare time Angela belongs to a Handbell Ringing group, goes country dancing and enjoys listening to music, particularly the operas of Verdi and Wagner.
Posted by Lizzie at 13:53