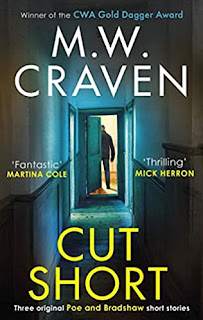 
Cut short contains three cold case short stories featuring Detective Sergeant Washington Poe and his friend and colleague Tilly Bradshaw of the Serious Crime Analysis Section of the National Crime Agency. The two detectives are very different characters. Poe is a down-to-earth country man, whose knowledge of the history of his Cumbrian countryside combines with his understanding of human nature to produce his formidable detective skills. Bradshaw is a genius who has unequalled knowledge of science and technology but little understanding of everyday human desires.

The two detectives are on leave and in the first story, The Killing Field, Poe is rescued from Bradshaw’s proposed pleasure trip to Sellafield Visitor Centre by a summons from a senior officer asking for help. When Poe realises their destination he thinks that even interactive games dressed up as an isotope at Sellafield would be preferable to revisiting the land known locally as the killing fields, the largest mass grave in the world, where half a million animals were slaughtered and buried during the foot and mouth outbreak that devastated the countryside. One of the burial pits had developed a leak and, while dealing with it, the remains of two men were discovered. The men had died in a horrific way and the officer in charge of the case needs Poe’s local knowledge and understanding of the time to make sense of the crime.

In the second story, Why Don’t Sheep Shrink?, it seems possible that Poe has contracted covid-19, and, as Bradshaw has been in company with him, she has to isolate with him rather than returning to her hotel. Although they are good friends, Bradshaw and Poe are two people who are happiest alone, and this promises to be a very stressful time, however, to break the monotony, Poe shares with Bradshaw a case that has been worrying him for years. When Michael Sims had drowned in his bath following an epileptic seizure, the case had never officially been a case because the coroner had returned a verdict of misadventure. However, Sims’ sister had been convinced that he was murdered, and Poe had a very good reason to believe she was correct. Although the coroner’s verdict meant that Poe’s hands were tied, he had kept an unofficial file containing his findings, and uses this period of self-isolation as an opportunity to explore whether Bradshaw’s unique skill set can help resolve the case.

The third story, Dead Man’s Fingers, is again set against the background of the catastrophic effect that foot-and-mouth had on the rural community. Bradshaw and Poe have gone for a ‘stroll’ (a term that Poe abhors because it makes him sound old). When Poe’s dog, Edgar, runs away, they follow him, and Bradshaw notices an anomaly in a wild flower field, donated by a local farmer as a nature reserve, this leads them to uncover a tragic secret that has been unsuspected for two decades.

The three stories are contemporary, using as a background the covid-19 pandemic, but they also reach back into the past as Bradshaw and Poe explore cold cases or crimes that had not been suspected at the time. The investigations are tailored to show the contrasting but collaborative strengths and skills of the two detectives and the relationship between them is very engaging. The stories are enjoyable and provide an excellent introduction to the novels featuring Tilly Bradshaw and Washington Poe.
------
Reviewer: Carol Westron

M. W. Craven was born in Carlisle but grew up in Newcastle. He joined the army at sixteen, leaving ten years later to complete a social work degree. Seventeen years after taking up a probation officer role in Cumbria, at the rank of assistant chief officer, he became a full-time author. Winner of the CWA Gold Dagger for his book The Puppet Show.  Mike lives in Carlisle with his wife, Joanne. 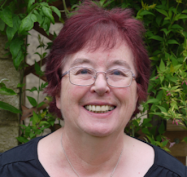