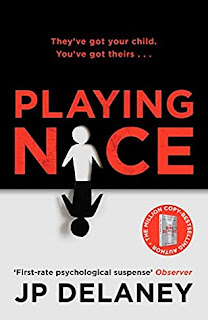 The author is an international best-seller writer and, in his latest novel, has high expectations to satisfy.   The plot line is simple. What do two families do when  a shocking discovery reveals that, in the neo natal intensive care unit of the hospital, their cherished sons, (now two year toddlers) were accidentally switched at birth and given to the wrong mothers?

What we have here are two very different sets of parents - one struggling to make ends meet, the other well-to do. Pete, who’s a freelance journalist and a stay- at- home, hands on, father to Theo, has an Australian partner, Maddie who works in advertising. Miles  is married to Lucy; they own a smart house, are comfortably off and David is their little boy.

Unbeknownst to Pete and Maddie, Miles had hired a private investigator, Don,  to secure a sample of Theo’s DNA. Don did this by furtively going to Theo’s nursery school and illegally removing his sippy cup that contained his DNA. The test result showed that Theo’s relationship to Miles and Lucy was in no doubt whatsoever and confirmed that he was their biological child.  A DNA test of David was organised by Miles and Lucy that established he’s not related to them.

Theo is a headstrong little boy with a bullying nature that’s causing the nursery school some concern, although Pete is more than willing to work with nursery staff to iron out the problems. Theo’s resemblance to  Miles is striking.   David, however, is more passive with challenging mental and physical issues caused by his very premature birth and is a look alike to Maddie’s younger brother.  On the other hand, Miles and Lucy have the means to provide David with the necessary, life-long special care.

Miles and Lucy decide to sue the hospital where the swap occurred that triggers an internal investigation.  The negotiations between the two couples are, initially, cordial but then the relationship explodes as Miles becomes increasingly, irrational and  unreasonable and, indeed, psychopathic, and determined by fair means or foul to get back possession of Theo.

Reading this book is a high-wire trip. It’s slick, un-putdownable, with  twists and turns, taking the reader  out of his/her comfort zone and  goes well beyond a  noir domestic drama. The author’s narrative skill and character development  is hard to beat,  and turns the cliché of swapped babies into something totally gripping and compulsive. Highly recommended.
------
Reviewer: Serena Fairfax

JP Delaney is the pseudonym of an author who has previously written award-winning fiction under other names.

Serena Fairfax spent her childhood in India, qualified as a lawyer in England and practiced in London for many years. She began writing by contributing feature articles to legal periodicals   then turned her hand to fiction. Having published nine novels all, bar one, hardwired with a romantic theme, she has also written short stories and accounts of her explorations off the beaten track that feature on her blog. Her tenth, novel has been published. Thrillers, crime and mystery narratives, collecting old masks and singing are a few of her favourite things.
www.serenafairfax.com