‘The Spoilt Kill’ by Mary Kelly 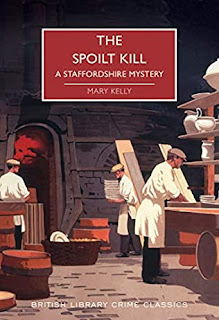 This book, was first published in 1961 by Michael Joseph when it won the Crime Writers Association Gold Dagger, beating John Le Carre’s Call for the Dead, is set in the Potteries in Staffordshire. It has an unusual narrative structure: ‘What Happened’ which describes the discovery of a body but whose we are not told; ‘What Happened Before’ in which we meet the protagonist and various other characters and the events leading up to the discovery of the body; and ‘What Happened After’ when the identity of the body is revealed and the circumstances of the death made clear.

The narrative begins dramatically enough: ‘I had been spying on Corinna for over two weeks: spying on her for pay.’ The narrator is Nicholson (we never know his first name), a private investigator who has been hired by the long-established pottery firm of Shentall  to investigate the apparent leaking of its designs to foreign competitors who then undercut Shentall’s prices. Nicholson’s cover is that he is a journalist hired to write a history of Shentall; while he is not enthusiastic about his present assignment he prefers it to what most private investigators of the time did – look for evidence of adultery so as to found successful petitions for divorce.

At the moment Nicholson is tagging along with a party of visitors who are being conducted round Shentall’s by Corinna Wakefield from the Art Department, one of several designers who produce suitable decorations for the products. Corinna is suspicious of Nicholson and his true motives, and we know that in addition to her being one of the suspects regarding the leaks, he is also deeply attracted by her icy beauty and enigmatic personality. It is while the party is in the slip house where the clay is being prepared for manufacture and, and in a wet and sloppy condition known as ‘slip’ which is stored in a wooden container (an ‘ark’), that Corinna discovers a body.

In the second and longest part of the story we go back to the preceding events and get to know the characters. Head of the firm is Luke Shentall, last of those who had founded the firm in the eighteenth century and his descendants who brought it to its present prominence. There are Corinna’s colleagues from the Art Department, Judith on the switchboard, gentle and vulnerable, and lively, flirtatious Freddy Lumbardine, electrical engineer, a born optimist who expects the best from life and usually gets it, Freddy’s cousin, Dudley Bullace, an accountant with a harsh, sneering personality, Colin Dart, another accountant, socially insecure and constantly belittled by his cold, sneering wife Gillian. And it is noticeable that, true to the time it is set in, accents, some of the class aspects of earlier years are for some people very important – the moment a person opens their mouth and speaks, a judgment is made as to their place in society. It is extraordinary to think that the Beatles and the Stones, whether they were a trigger or a symbol, were only a few years away.

But it is on Corinna that Nicholson is concentrating as the possible leak. She is very much the outsider and while an excellent artist, bitter that her more modernist and abstract designs are deemed not acceptable to the traditional chinaware market. She is badly off and, as Nicholon gets to know her better, she admits to him that she is terrified of a lonely and penniless old age. She has been married but refuses to discuss her husband – where and who is he?

Nicholson is more and more fascinated by her but how does she feel about him? It is not until the third part of the book that we find out who died and why with an ending that is both unexpected and ultimately tragic.

I chose this book because I had just read my first Arnold Bennett (who published a whole series of novels set in the Potteries in the first years of the twentieth century) and rather to my surprise enjoyed it. So, when I saw this title in the British Library Crime Classics series, I thought I would give it a try. In fact. I was very impressed by the evocation of the industrial landscape of the Potteries, the deep and powerful depiction of the characters, and the overall quality of the writing.

The cover, like many if not all, of the Crime Classics series, is taken from a travel poster of the time and depicts a scene of men working in a Staffordshire pottery. And ‘kill’ is actually another word for ‘kiln’ in which the pots would be fired. Recommended.
-------
Reviewer: Radmila May

Mary Kelly, née Coolican (1927–2017), was Born in London, she received an M.A. degree from University of Edinburgh in 1951. A crime writer best known for the Inspector Brett Nightingale series. Writing in the 1950s and 1960s, Kelly was celebrated for the sense of refreshingly dark suspense in her mysteries. Her novel The Spoilt Kill, published in 1961, won the Gold Dagger Award. She married Dennis Charles Kelly in 1950.

Radmila May was born in the U.S. but has lived in the U.K. since she was seven apart from seven years in The Hague. She read law at university but did not go into practice. Instead she worked for many years for a firm of law publishers and still does occasional work for them including taking part in a substantial revision and updating of her late husband’s legal practitioners’ work on Criminal Evidence published late 2015. She has also contributed short stories with a distinctly criminal flavour to two of the Oxford Stories anthologies published by Oxpens Press – a third story is to be published shortly in another Oxford Stories anthology – and is now concentrating on her own writing.
Posted by Lizzie at 15:31