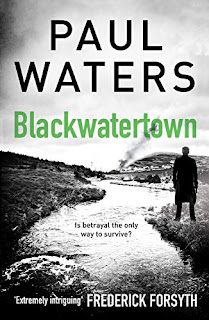 In this blackly humorous novel set in Northern Ireland in 1959 during a General Election campaign (Macmillan, ‘you’ve never had it so good’), Jolly (John Oliver) Macken is that rare creature, a Catholic policeman. He is despatched with his colleagues to escort an Orange Day parade deliberately planned to march through a strongly Nationalist Catholic village; when the parade ends in farcical chaos, Jolly’s superiors, needing someone to blame, demote him from sergeant to constable and send him to a small country town, not much more than a village, called Blackwatertown on the border between Northern Ireland and the Irish Republic. He is to replace the only Catholic on the small force in Blackwatertown who is said to have accidentally shot himself. Jolly is appalled to discover that the dead man was his much younger half-brother Daniel McMahon, a fact apparently unknown to anyone else. Jolly, who had been inclined to take the demotion as an excuse to leave the police, decides that he will take the move to Blackwatertown and find out more about his brother’s death, at the same time welcoming the chance to what he hopes will be a quieter life.

On arrival at Blackwatertown Jolly is accommodated in the police barracks – just a house, really – with accommodation for himself and another constable, Cedric Andrews, in one room, Billy Gracey, the barracks sergeant, and Bull, the desk constable. On his first foot patrol he manages to offend the local vicar who is out on a cycling trip with a bunch of church ladies. But it is while he is on vehicle patrol with Gracey and Andrews along the border between Northern Ireland and the Republic that something happens which starts a whole train of unfortunate events: Andrews, who had been in the back, had failed to fasten the catch of his Sten Gun and when the car went over a pothole the gun went off damaging the car. In order to avert blame from Andrews, Gracey orders him and Jolly to shoot up the car and informs the authorities that they had come under attack from over the border. The result of this is that the B-Specials (armed Protestant volunteer militia) are called in. And this interests men in Dublin and Belfast who, while no friends to the Unionist majority in the North, are not too happy about these events and are determined to find out what exactly is going on and to see if they can twist events to go their way. And the General Election is potentially a good opportunity to obtain maximum publicity. Events spiral out of control with attacks on Unionist politicians and on an army barracks in nearby Armagh.

Throughout all this Jolly try to tread the narrow path between his duty as a police officer and his wish to calm things down before they get worse. And his mind is much occupied with another matter – his increasingly strong feelings for the beautiful and alluring Aoife Penney, daughter of a local Catholic farmer with Republican sympathies, whom he first meets before ever getting to Blackwatertown, and who enchants and teases him in equal measure. There is a growing attraction between them and Jolly hopes they can one day leave the troubled province and make a life together. But Aoife has secrets, not political but deeply personal, deeply tragic, which destroy her. Yet for all this, the story ends on a note of hope and optimism. Recommended.
------
Reviewer: Radmila May 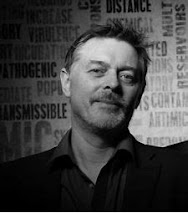 Paul Waters grew up in Belfast during ‘the Troubles. He was involved in cross-community peace groups and went on to report and produce for BBC Northern Ireland, BBC Radio 4, BBC Radio 5 Live, the BBC World Service and Channel 5. His claim to fame is making Pelé his dinner. But Paul has also covered elections in the USA, created an alternative G8 Summit in a South African township, gone undercover in Zimbabwe, conducted football crowds, reported from Swiss drug shooting-up rooms, smuggled a satellite dish into Cuba to produce the first BBC live programmes from the island and produced the World Service’s first live coverage of the 9/11 attacks on America. Paul has taught in Poland, driven a cab in England, busked in Wales, been a night club cook in New York, designed computer systems in Dublin, presented podcasts for Germans and organised music festivals for beer drinkers. He lives in Buckinghamshire and has two children.

Radmila May was born in the U.S. but has lived in the U.K. since she was seven apart from seven years in The Hague. She read law at university but did not go into practice. Instead she worked for many years for a firm of law publishers and still does occasional work for them including taking part in a substantial revision and updating of her late husband’s legal practitioners’ work on Criminal Evidence published late 2015. She has also contributed short stories with a distinctly criminal flavour to two of the Oxford Stories anthologies published by Oxpens Press – a third story is to be published shortly in another Oxford Stories anthology – and is now concentrating on her own writing.
Posted by Lizzie at 16:24