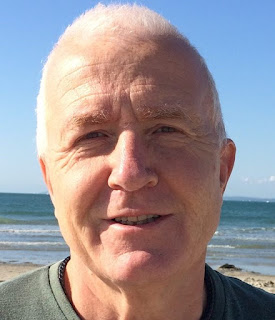 Graham Minett studied Languages at Churchill College, Cambridge before teaching for several years in Gloucestershire and West Sussex.
In 2008 he completed a part-time MA in Creative Writing at the University of Chichester and subsequently won both the inaugural Segora short story competition in 2008 and the Chapter One competition in 2010. The latter consisted of the opening sections of what would eventually become his debut novel, The Hidden Legacy.
Now writing full-time, he has published 3 further books,
Lie in Wait, Anything for her, and his latest book The Syndicate.
He lives in West Sussex with his wife and children.

Lizzie: Graham, you have just published your 4th book The Syndicate.  Can you tell us a little about it?
Graham: I’d love to. On the face of it, it looks like a major departure from what I’ve been doing till now but, as some of the reviews have been quick to point out, this is still very much a psychological thriller rather than a book about gangland violence. Jon Kavanagh has been nowhere near that type of life for 20 years by the time the action starts but it’s his determination to make up for his past – and for one specific night in particular – that
provides the impetus for the whole book. He has been haunted for a long time by the image of a small girl at the top of the stairs whose life he has just changed in the worst possible way and he knows he has to find out what happened to her and seek a way to put things right.

Lizzie: I haven’t had the pleasure of reading your second and third books, Lie in Wait and Anything for her, but I have read The Hidden Legacy and The Syndicate.  Both the latter two books deal with atonement.  Is that coincidental or is this theme something you feel strongly about?
Graham: It’s a good spot. Atonement is not quite such a prominent theme in the other two books where revenge maybe plays a more important role, but you’re quite right to identify it as being at the heart of The Syndicate and The Hidden Legacy. I’m not sure I feel any more strongly about atonement than the next person, but I do see it as a compelling plot device. There’s something fascinating about exploring how far we’re prepared to go to put right something for which we know we were responsible. What Kavanagh is seeking is redemption. The ghosts of his past are crowding him as he gets older and it’s the only way he’ll find the sort of inner peace he needs.

Lizzie: Are the main characters in your books all pure fiction, or based on people that you have come across?
Graham: All pure fiction. I have friends who think they can recognise themselves in certain characters and they may be right when it comes to the odd turn of phrase or physical attribute but I tend to borrow from several different sources and create composites rather than depicting specific individuals. I’d never be that inconsiderate.

Lizzie: What triggers the idea for a new book?   Something that you see or read about or personal experience ….?
Graham: Always a character. I’m always knocking around ideas for someone I’d like to write about and fleshing out background. I know what they read, what music they like, all the obvious physical details and
timelines. What I’m really looking for though is the person’s weakness, the achilles heel. Then the plot comes from rooting around for a scenario that will put that weakness to the test. I’ve always enjoyed reading novels that put characters under the maximum strain in that way and want to provide the same service for readers who are good enough to buy my novels.

Lizzie: Prior to writing fulltime you were a teacher. Did this prove a good training ground for understanding young people?  I refer particularly to The Hidden Legacy.
Graham: I’m sure it helped a great deal. You can’t be involved in 11-18 education for nearly 45 years and not develop some sort of understanding of the way children react in different situations. Obviously my experience at various schools, especially in later years when I was Head of Sixth Form and then Assistant Headteacher, brought me into contact with a lot of children who were struggling against the odds in a way which was so
different from my own upbringing. If there’s a thread running through all four books so far, it’s the amazing resilience that enables some people to overcome even the worst that life can throw at them.

Lizzie: How do you construct your books? Do you plan how the story will unfold and who the perpetrator is, or do you have an idea – start off and see where it takes you?
Graham: In the planner versus pantser debate, I’m very much the former. Before I write a word of the first draft, I create three documents. One is a series of character studies, listing the major protagonists and the answers to a series of questions about their individual biographies. The second is a detailed timeline of dates of birth, marriages, significant events leading up to the start of the novel. The most important though is the third, a chapter by chapter analysis of what happens with colour coding to make sure I’ve included all of the details in the first two documents. I can know a character inside out and feel she is completely consistent, but unless I manage to include all those little details somewhere in the narrative, the reader isn’t going to view her in the same way and may find some of her actions unlikely.

Lizzie: Are you a disciplined writer i.e. have a firm routine for writing - a certain number of hours each day, or set yourself a target of x amount of words?
Graham: Not really, no. I’m nowhere near as disciplined as some friends whose commitment never ceases to amaze me. I have spells when I’m actually quite lazy, usually during the preparatory phase when I’m preparing the first two documents I referred to earlier and just knocking characters into shape in my head. Once I’m into the writing itself though, especially once I have a deadline I’m working towards, I’m much better. I hate to miss deadlines and will work ridiculous hours for days on end to make sure I meet them. I think that’s my experience as a school timetabler that helps there.

Lizzie: When embarking on a new book, what area of the book challenges you the most?
Graham: The first sentence of the day. I can’t switch on the laptop and just pick up where I left off the day before. I always have to re-read the previous day’s contribution and edit it. I’m constantly re-shaping sentences, looking for just the right expression for a particular context and it often means that I have hardly any time left to produce anything new for the day. I’m sure it cuts down on a lot of work when it comes to the editing process.

Lizzie: Currently you have written standalones, have you thought about a series?
Graham: I’ve thought about it quite often but resisted the temptation so far because my novels are essentially character driven. I love dreaming up new protagonists and hope they stay with readers at least for a little while, even after they’ve moved on to the next book. If I go for a series and write about the same character each time, that’s a different challenge. I’d need to develop her over a long period of time and sustain the level of interest. Some authors do this brilliantly – John Sandford, Ian Rankin, Michael Connelly, David Mark, Brian Freeman, Mick Herron. If I ever do go down that road, which is not impossible, I’d give anything to be able to match their achievements.

Lizzie: So, what’s next?
Graham Next is still up in the air to some extent. My wonderful agents, Lisa Moylett and Zoe Apostolides at CMM, have been very enthusiastic about a first draft I did a while ago of a novel which I put away in a drawer, so I’m re-drafting that at present to make it more compelling and eradicate the more glaring weaknesses. I also have an idea which has come to me from a friend I knew during my teenage years which revolves around Berlin in the 1970s/80s but that would be a major break from what I’ve done so far, not least because it’s prompted by a storyline rather than a character. Don’t worry though – the moment I know for sure, I’ll be making sure you know about it.

Thank you so much for this opportuity, especially during this wretched pandemic when 'getting a book out there' is so much more difficut. Much appreciated.

Thank you for talking with us Graham.