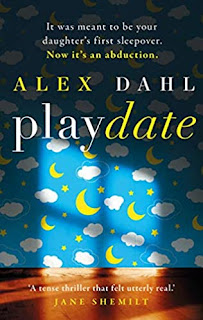 
It’s every mother’s nightmare. It seems like a perfectly ordinary playdate with schoolfriend from a pleasant family in an enviable home – but when it’s time for the child to come home, there’s no one there and they don’t answer the phone. At first the police are all over it, but time passes and there’s no ransom note, no sightings, not a scrap of evidence to suggest what might have happened. So, the nightmare continues, the police lose interest, and the parents are left in limbo.

But of course, these things are never simple; there’s always more than one side to a story.

Alex Dahl explores this story from four sides. Elise, the bereft mother, is slowly falling apart. Selma, a newspaper journalist, is transfixed by the story and determined to get to the bottom of it. Lucia, the abducted child, has her own version of events; so too does Jacqueline, the abductor. It soon becomes clear that it will all end in tears for someone.

If it wasn’t for a descent into violence when the book is more than halfway through, Playdate would be less a crime novel per se, and more a novel about the impact crime can have on the people involved. The intertwined stories are fertile with detail about locations in Norway and France, backstory which ultimately makes sense of it all, and above all characters and family relationships. It’s easy to imagine the everyday lives of everyone involved: Elise the airline stewardess, going about her routine, smiling mechanically for the passengers, then returning to her husband and son; Selma hunched over her laptop researching the names the police have released, when she isn’t falling apart herself; Lucia, distraught and confused; Jacqueline, trying to forge a life for herself.

Everyone has secrets, and eventually they come out, and lead to the dramatic denouement. But through it all, there’s a sense that the nightmare will never quite go away for anyone. In Playdate, Alex Dahl has produced a highly competent debut novel, part literary fiction, part tense thriller. It’s not an easy read, or a comfortable one; but it is an enthralling story, richly drawn and thought-provoking.
-------
Reviewer: Lynne Patrick

Alex Dahl was born in Oslo, Norway, and is half American, half Norwegian, fully Francophile, and London resident. Alex is the author of The Boy at the Door, published world-wide in 2018. She holds an MA in Creative Writing from Bath Spa University, as well as an MSc in Business Management. Alex loves to travel and has previously lived in Moscow, Paris, Stuttgart, Sandefjord, Switzerland and Bath.  To learn more about Alex Dahl, please visit her on Twitter, Instagram and Facebook