‘Cast the First Stone’ by C B Hanley 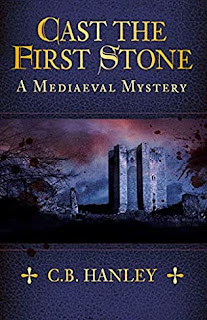 It is November 1217 and Edwin Weaver, protagonist of 5 previous novels by this author, has returned to the village of Conisbrough in Yorkshire where he was born and brought up. Much has changed in the preceding years, both for him and for England. After the disastrous reign of King John (d. 1216) when the country had descended into chaos followed by an invasion by the French, a very young king, Henry III, was on the throne and for the first few years of his reign the country was ruled by a succession of regents. Edwin himself had been caught up in the warfare of the previous years and had acquitted himself well, using his considerable intelligence rather than any warlike ability, and, although from a humble village background, had commended himself to William de Warenne, Earl of Surrey, to the extent that he became known as ‘the earl’s man’, an ill-defined office which his fellow-villagers resent. The Earl has arranged for the castle to be rebuilt in stone (not as commonplace for castles of the period as one might think) employing masons (some of them French) to do the rebuilding. He himself does not live there; although his castellain, Sir Geoffrey, does, he is presently away visiting one of his other manors, another of the knights, Sir Roger, is at the castle. Being members of the knightly class, they, in the rigid feudal society of the time, have a status that is not available to ordinary people, such as the freemen and serfs of Conisbrough village who are obliged to spend much of their time labouring in the earl’s fields. But not all villagers work on the land; there are also carpenters and smiths and so forth.

Edwin does not expect to find the amount of hostility towards him that there is among a number of the villagers, not just because he is now ‘the earl’s man’ but also because he has come back to the village with a wife, his beloved Alys, who is not a local girl and who is also, for that reason, looked at askance. Nonetheless, Edwin is determined to deal justly with everyone. When the new bailiff, Ivo (chosen by the lord to deal with the lands attached to the castle) asserts his authority over the villagers, having already fallen out with the masons over a number of petty details, behaves towards the villagers in an oppressive manner, in particular announcing that they must bake their bread, not as previously in the village communal oven, but in one specially built belonging to the earl and must pay to do so. For the villagers, as impoverished as were most of the population at this time, this is disastrous, and Edwin speaks out against him, as does the village priest.

And then Ivo is found dead, bludgeoned to death in the house that is being built for him, and suspicion falls first of all on the foreigners and on one in particular, Denis. And when Edwin, who is not convinced that Denis is the culprit, begins to investigate, suspicion also falls on him and he finds himself in real danger.

This is a dramatic and gripping story with a wealth of historical detail skilfully woven into the narrative. There is a useful historical note at the end which provides further background.
Highly recommended.
------
Reviewer: Radmila May 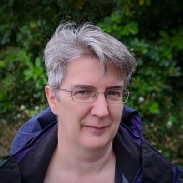 C B Hanley (who also writes as Catherine Hanley) was born in Australia. She gained a degree and a PhD at the University of Sheffield. Her love of medieval studies led to a number of academic and non-fiction publications, but she decided that writing fiction was more fun. Since moving to the UK she has lived in Somerset and Sheffield, and is currently based in the Midlands with her husband and three children.

Radmila May was born in the U.S. but has lived in the U.K. since she was seven apart from seven years in The Hague. She read law at university but did not go into practice. Instead she worked for many years for a firm of law publishers and still does occasional work for them including taking part in a substantial revision and updating of her late husband’s legal practitioners’ work on Criminal Evidence published late 2015. She has also contributed short stories with a distinctly criminal flavour to two of the Oxford Stories anthologies published by Oxpens Press – a third story is to be published shortly in another Oxford Stories anthology – and is now concentrating on her own writing.
Posted by Lizzie at 13:33