‘Blood at Beltane’ by Sally Spedding 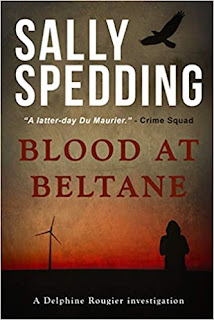 In 2007 Ifor Griffiths is awarded a Bursary to find and translate work by French poet Gaspard Lecroix. He will travel to the Sarthe department near Le Mans where Lecroix lived in the eighteen hundreds. However, Ifor wants to keep it a secret from Menna his scornful partner and their curious young son Arthur.

We then go forward to 2008 and meet Delphine Francois Rougier on her twenty fifth birthday. Her boss Colonel Serge Valon picks her up to visit a wind farm being constructed where people are meeting to protest. However first they have to go to a nearby farm where a disturbance has been reported.

On arrival they are horrified to find a pile of birds on the kitchen table, shot and mutilated, some still alive and in agony. Valon puts them out of their misery.

The woman living there Athene Lardin is cuffed when threatening them with a rifle. She is taken to Labradelle's gendarmerie. They discover that over the years and always on April 30th people close to Lardin have died, some in mysterious circumstances.  She is allowed to go but with terrible consequences, some of which affect Delphine and the team badly.

Ifor arrived in France at the beginning of the year and met up with a young lady he had fallen in love with the previous year.  However, she is not all that she seems. He has landed in more trouble than he could have imagined. Her whole family turns out to be suspect.

Meanwhile Athene Lardin seems bent on her strange agenda and is adept at avoiding the police at every turn. It seems she also has an interest in Lacroix's poetry, but why?

The Labradelle team are almost torn apart as they undergo one shocking incident after another. Then to add to their problems Athene forecasts that someone will die on 30th April – Walpurgis Night – which leads on the 1st May into Beltane. Can they prevent yet another death before the deadline?

No matter which way Valon, Delphine and the team turn they are thwarted by people who are not as innocent as they appear, including within the Labradelle gendarmerie itself. Who can they trust?

Wow, Sally Spedding hits the spot once again. A story full of red herrings and blind alleys producing a clever tightly wound plot with many surprises. Delphine once more reveals hidden depths of endurance and great detective skills. I hope she gets a promotion soon!

Highly recommended for lovers of tangled webs to unravel. 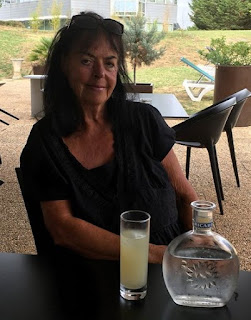 Sally Spedding was born by the sea near Porthcawl in Wales and trained in sculpture in Manchester and at St Martin's, London. My work was detailed, accurate and in demand, but I began to realise words can deliver so much more than any narrative sculpture or painting. Sally’s first crime mystery, Wringland, has a strong historical thread and is set in the bleak fenland around Sutton Bridge. Cloven also invokes the past while in A Night With No Stars, published in January 2005, it's a fourteen year old murder which destabilises the present. Prey Silence, set in SW France, featuring an animal rights activist, was published in July 2006. Come and be Killed, set in the Malvern Hills, came out in January 2007. Her strong familial connections with the Pyrenees, Germany and Holland have provided her with themes of loss and exclusion. The dark side of people, and landscape. The deceptive exterior, the snake in the grass are all themes which recur in her writing..