‘The Christmas Egg’ by Mary Kelly 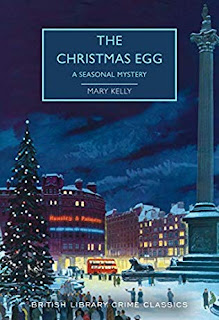 The Princess Olga Karukhina spent the first half of her life in power and luxury in her native Russia and the second half in poverty and squalor in lodgings in Islington, London, and it is there that she died in suspicious circumstances.

The old lady’s death is investigated by Detective Inspector Brett Nightingale and his assistant, Detective Sergeant Beddoes. The discovery of an empty trunk under the princess’ bed causes the detectives to suspect that the princess may have hoarded treasures from her luxurious past, and the fact that she has given a couple of magnificent items to a neighbour helps to confirm this. The police have been aware of a gang of thieves who started their career of crime in Hampstead and Nightingale suspects that the princess may have been their latest victim. However, the detectives must also focus their attention on tracking down the princess’ grandson, Ivan, who returned from his work as a clerk in the office of St Pancras Station and then fled. Ivan is a drunkard who is frequently on bad terms with his grandmother, so he is the detectives’ main suspect. To confuse things further, they have to take into consideration the fact that the princess claimed to be afraid of Bolsheviks hunting her down.

In the course of his investigation, Nightingale interviews Mr Majendie, a wealthy jeweller. Majendie admits to being summoned by the princess and inspecting her jewellery and other treasures because she was considering selling them. Nightingale is uncertain whether to trust Majendie. Nor can he understand the role played by Stephanie Cole, Majendie’s youngest and most junior sales assistant, who keeps appearing in the enquiry. Some drunken words spoken by Ivan describe one of his grandmother’s treasures, ‘The Easter egg... All white an’ glittering, lovely, like ice an’ frost an’ stars.’ This confirms that, despite living in squalor, the princess still possessed treasures worth a fortune.

As Nightingale and Beddoes track down the treasures, in the hope of discovering the murderer, their job becomes increasingly dangerous, and soon Nightingale is in peril of his life.

The Christmas Egg is the third book in the series featuring Nightingale and Beddoes, but it is the first of her books republished by the British Library Crime Classics. It is an interesting book based on a fascinating premise and with several subtle psychological insights. The structure of the book is unusual, starting as a police procedural, with some skilfully described historical investigation and explanation, but transforming into a thriller, which culminates in kidnapping and car and helicopter crashes. Nightingale and Beddoes are both likeable and engaging characters with a good working relationship. First published in 1958, The Christmas Egg explores the harm done by those who cling to the past at the expense of those dependent upon them. It is an interesting link between the classic books of the Golden Age and the new wave of outstanding crime writers in the early 1960s, such as P.D. James and Ruth Rendell. As with all the British Library Crime Classics, it is enhanced by the excellent introduction by Martin Edwards. I enjoyed this book and would recommend it to anybody who enjoys traditional crime fiction.
------
Reviewer: Carol Westron

Mary Kelly, née Coolican (1927–2017), was born in London, she received an M.A. degree from University of Edinburgh in 1951. A crime writer best known for the Inspector Brett Nightingale series. Writing in the 1950s and 1960s, Kelly was celebrated for the sense of refreshingly dark suspense in her mysteries. Her novel The Spoilt Kill, published in 1961, won the Gold Dagger Award. She married Dennis Charles Kelly in 1950.