The annual CrimeFest conference took place at The Mercure Grand Hotel in Bristol.

Elisabeth Carpenter says, ‘it was fantastic to be back at CrimeFest after a two-year break – catching up with friends after so long was such a joy.  Here’s a round-up of two of the panels I attended on the Friday.’

Not so perfect lives

This was a hugely entertaining panel – Tina Baker paid homage to her love of Soap Operas, making an entrance in a glamorous bedtime outfit a la Bet Lynch, paired with curlers in the style of Hilda Ogden.

The authors went deep into their influences when exploring the darker side of domestic life, drawing on their own personal experiences.  The question arose if it is nurture or nature that creates a murderer, and there was a mixed response. The authors agreed, however, that writers need to use artistic license when creating darker characters.A really interesting panel.

Plots that twist and turn

Another entertaining panel, where the focus was on how the writers plot twists and if they planned them before writing. All agreed on planning, but with differing levels. Some wrote very detailed and long chapter outlines, and some used Post-It notes on the wall. A great panel with lots of laughs – the time flew. Top tip: keep a notebook with you at all times for when inspiration hits! 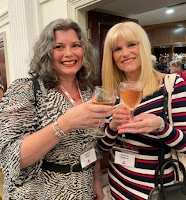 On Friday evening, shortlisted authors were announced for the Dagger Awards.
Photograph left is Bryony Pearce and Caroline England who were shortlisted for their short stories –
Blindsided, and Changeling (respectively),
both published in ‘Criminal Pursuits:
Crime Through Time’ edited by Samantha Lee Howe (Telos Publishing).
Congratulations! To you both.

Elisabeth Carpenter is the author of five novels;
the most recent,
The Vacancy
was published by Orion in August 2021