‘Murder in the Manor’ by Roy Lewis 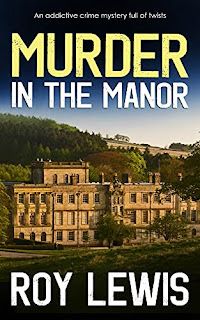 
Murder in the Manor has all the elements of a classic whodunnit: a varied cast of characters thrown together in a stately home, mysteries ancient and modern, an enigmatic stranger who turns up dead in suspicious circumstances. There’s even a secret passage.

Arnold Landon is a planning officer with a passion for medieval history. He’s delighted to have the opportunity to catalogue the library at Oakham Manor but gets rather more than he bargained for: while researching the manor’s past, he finds himself being drawn into present-day wranglings about its ownership and future. There’s a dispute between the current occupant (the self-possessed Miss Vallance) and another branch of the family, not to mention an American corporation with its own claim on the property. The narrative blends investigation of secrets that the manor has concealed for centuries with very modern business machinations: Arnold is somewhat out of his depth in the latter, but when things take a turn for the deadly, he is the one who ultimately succeeds in unravelling events and identifying the culprit.

This is a reprint of a work originally published in the 1980s, and thus although the action was contemporary when it was written, it inevitably now has the feel of a period piece. However, the central themes – the protection of heritage versus the lure of filthy lucre, and what people are prepared to do to get what they want – are timeless ones.

This is a slow burner rather than a fast-paced thriller: the sort of thing to read on a lazy weekend afternoon or by the pool on holiday. But while the plot takes a while to develop, the pieces ultimately come together in a very satisfying fashion. Towards the end there’s a twist of the best sort: one which has clues pointing towards it throughout, and which makes sense of everything that’s happened, but which I at least did not come close to anticipating.

Arnold seems to have an uncanny knack of stumbling across mysteries: this is the second book in a series of eighteen. So, for those who are intrigued by his exploits, there’s plenty more to explore.
------
Reviewer: Meriel Patrick

Roy Lewis was born in 1933. He is a well-established crime writer with 60 novels to his name. He lives in the north of England where he sets many of his books. He is a former college principal and Inspector of Schools who now runs business training programmes and has business interests in Hong Kong, Singapore and Malaysia. He has three children - all of them lawyers.

Meriel Patrick has been an avid consumer of crime fiction since discovering Agatha Christie at the age of nine. She has been writing for even longer than that: she has had short stories and academic articles published, and is working on a novel (which is, of course, a mystery). She juggles multiple jobs, including teaching University of Oxford visiting students about C. S. Lewis, and his use of stories to convey theological truth.