‘No Place to Run’ by Mark Edwards 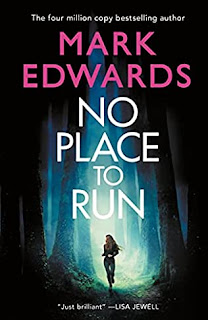 Aiden Faith was delighted when his younger sister Scarlet came to stay with him in Seattle.  Taking her out to see the sights fifteen years old Scarlet is amazed.  They get caught up in a ‘Climate Action’ demonstration, and whilst Aiden is keen to avoid the crowds, Scarlet is thrilled, excited and taking it all in with shinning eyes. She mouths to him ‘This is so cool’.

A few days later when Aiden goes to wake Scarlet for breakfast, she is gone.  Now two years on despite trying everyone and everything and exploring every avenue, chasing up every lead that comes his way from the website he set up, ‘FindScarletFaith’, Scarlet is still missing, and Aiden has all but given up hope.

Then he receives an email from a Francesca Gilbert who was travelling on the Amtrak’s Coast Starlight from Los Angeles to her home in Seattle when she says from the train, she saw Scarlet running across a forest clearing in Northern California towards the train. Aiden contacts Francesca, and she tells him she has checked the photograph of Scarlet on the website and she is convinced that the girl she saw was Scarlet.

So, Aiden decides to take the train to the spot where Francesca saw the girl and take it from there.  He visits the local police in the town of Eaglewood, but there are no leads, just dead ends. He rents a car and drives around, and thinks that if Scarlet ever was in this town she might have visited the local diner. When he shows the waitress Scarlet’s picture, she shakes her head and says no, sorry. But Aiden has seen a flicker of recognition. Has he got his first lead?

Looking for his missing sister Aiden makes enemies. People who will do anything to stop him in his search. Scarlet is seventeen now and Aiden is determined to find her - even if he dies in the attempt.

This is a fascinating read. Utterly gripping, I was totally hooked. Most highly recommended.
-----
Reviewer: Lizzie Sirett

Mark Edwards  writes psychological thrillers in which scary things happen to ordinary people and is inspired by writers such as Stephen King, Ira Levin, Ruth Rendell and Linwood Barclay. Mark lives in the West Midlands with his wife, and their three children He says he loves hearing from readers and always responds.