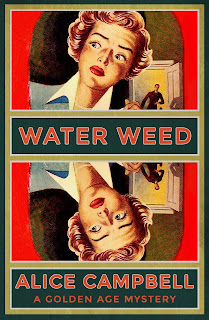 “Her maid found her this morning. She was lying across the bed, strangled.”

Virginia Carew is enjoying a trip to England with her father. She is pleased when she learns that a fellow American Glenn Hillier is also in England, and they arrange to meet for lunch. but Glenn is very late appearing only when Virginia’s father has joined her. Virginia nearly doesn’t recognise him; Glenn is so thin and ill looking strangely different from when she last saw him.  She learns that he is staying in the country with the Fenmores.  He waxes lyrical about the kindness he has been shown by the attractive charming lady he is staying with. Ginny assumes that he is in love and asks after Pam Fenmore. But is surprised to learn that he is speaking of Pam’s mother Mrs Fenmore, known as Cuckoo.

Some days later at the theatre with her father, Ginny bumps into Pam Fenmore who introduces her to Cuckoo Fenmore. The result of that encounter is an invitation from Mrs Fenmore to join them in the country the following week.

A large part of the book recounts many instances that illustrate  the strange hold that Cuckoo has over Glenn. He states that he has to protect her, that she has been ill-treated by her husband with whom she is now estranged.  Also at the house is Henry, the son, who is quiet and appears nervous and ill at ease.  And of course, Pam, the daughter who is loud and rather rude, the exact opposite to the delicate charming, beautiful Cuckoo.

A sudden death in this English country house in a blissfull setting is a shocking discovery, but even more puzzling is the disappearance of Glenn. Clearly, nothing is at it appears. For beneath the surface there lurks jealousy, darkness of the soul, rage and something undefined

With Glenn now suspected of murder and possibly suicide Ginny determines to uncover these secrets and clear Glenn’s name. But where is he?

I thoroughly enjoyed this mystery. It is compulsive reading, and I heartly recommend it.
------
Reviewer: Lizzie Sirett

Alice Campbell (1887-1955) came originally from Atlanta, Georgia, where she was part of the socially prominent Ormond family. She moved to New York City at the age of nineteen and quickly became a socialist and women’s suffragist. Later she moved to Paris, marrying the American-born artist and writer James Lawrence Campbell, with whom she had a son in 1914. Just before World War One, the family left France for England, where the couple had two more children, a son and a daughter. Campbell wrote crime fiction until 1950, though many of her novels continued to have French settings. She published her first work (Juggernaut) in 1928. She wrote nineteen detective novels during her career.
Posted by Lizzie at 11:40