‘The Distant Dead’ by Heather Young 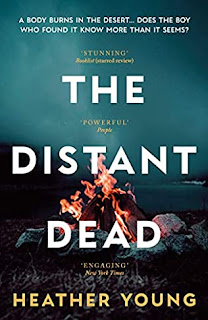 
After twelve-year old Sal Prentiss reports finding a dead, burnt body outside a small town in Nevada, the police begin searching for a murderer. The victim was Sal’s maths teacher, Adam Merkel, a mild-mannered, middle-aged man who had befriended the neglected and lonely Sal. Merkel had only recently left a more prestigious university post to come and teach youngsters in the desert. Why would he do this, and why would anyone want to kill him? Another of Sal’s teachers, Nora Wheaton believes Sal is withholding information. Formally married to Mason, one of the policemen involved with investigating Merkel’s death, Nora tries to gain Sal’s confidence and to understand the reason behind what has happened.

Sal, who sometimes seems gifted with the wisdom of Solomon, and Nora, whose main goal in life is to get away from school teaching and the small town once she no longer has to care for her ailing father, are the two main protagonists in the story. There are also many other well-drawn characters. Unfortunately, a number of them are nursing resentment or guilt following some form of disaster in their earlier lives. Nora’s ex-husband, Mason, seems to be one of the few, well-balanced and happy ones. Small wonder people turn to drugs they can ill afford for pain relief or to escape a troubled past, or other domestic problems.

The mysterious death is but one of several subjects populating this book. Family relationships and loyalties, and the dreadful, claustrophobic nature and repetitive inevitability of life in a small town where everybody knows everybody else and ends up marrying somebody they went to school with are all portrayed with consummate skill. Nothing happens in a hurry, but this is perhaps not surprising in a book that also tells of history and anthropology.

The Distant Dead is a well- crafted, original tale. However, whether or not you manage to work out who killed Adam Merkel, readers should be prepared for a truly shocking ending.
------
Reviewer Angela Crowther

Heather Young spent her childhood summers at a Minnesota lake with her Midwestern relatives. As a close observer of the small-town Midwest particularly the way its families protect and even nurture their darkest secrets, she became fascinated with its unique sensibility. Her first novel, The Lost Girls, is set on a remote lake in northern Minnesota near a town like the one where four generations of her family are buried. Heather now lives in northern California with her husband and two children. After receiving her law degree from the University of Virginia, she practiced law in San Francisco for a number of years before beginning her writing career. She received an MFA from the Bennington College Writing Seminars in 2011, and continued her education at the Tin House Writers Workshop and the Squaw Valley Writers Workshop.

Angela Crowther is a retired scientist.  She has published many scientific papers but, as yet, no crime fiction.  In her spare time Angela belongs to a Handbell Ringing group, goes country dancing and enjoys listening to music, particularly the operas of Verdi and Wagner.
Posted by Lizzie at 11:49