I know many of you will agree with me when I say launching a book is one on the most terrifying experiences we have, as authors, to subject ourselves to.

My career started at a very early age as an actor working in all mediums, from television to film to radio to theatre. In TV film and radio, if you make a mistake, they just shout, ‘Cut,’ and you do it again. If you make a mistake, or mistime a comedy line on the first night in the theatre, you just, quietly, tell yourself off, and vow to get it right tomorrow night. 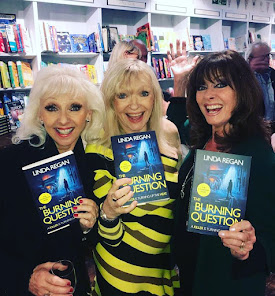 However, there are no second chances with a book, once it is edited and accepted, that is it, it is out there, and there is no correction time or going back. Many of us think we would like a second go, but that is never to be, we have to leave it to make its way toward readers, and get going on the next.

So, I was thrilled that when I decided to have a little party/book launch, that some of my closest friends turned up to support it, and we had a great evening.

I know many of you writers were at the Bristol Crime Festival, I understand,  and as a known comedy actress, I know I certainly mistimed that one. I will try to do better with the next book.

So for those of you that missed my launch, and believe me, we also missed you, here are a few piccys of a fun event.

Top left is me with my very close friends, The lovely Debbie McGee and the very beautiful Vicki Michelle (from ‘Allo ‘Allo, fame). Far right is me and my hubby, saying thank you to everyone, and attempting to make some jokes.

Picture bottom right is with my close friends from my charity, The Grand Order of Lady Ratlings, and in the back ground is the playwright Richard Harris being silly and having fun.

The Burning Question
is my ninth novel and is published by Headline.

My love and good and healthy wishes to you all,