‘Up in Flames’ by Geraldine Evans 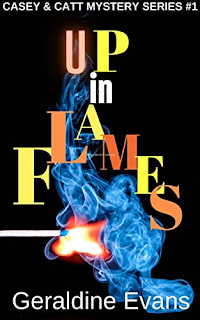 Readers familiar with the Rafferty/Llewellyn series by Geraldine Evans will be interested to know she has created a new and equally entertaining police duo in the shape of DCI Will Casey and DS Thomas Catt (affectionately known as Thomcatt) who make a promising debut in this cleverly-plotted crime novel set against a background of racism in a small English town.

When young Asian widow, Chandra Bansi, and her infant daughter, Leela, die in a horrifying fire at her flat, Casey and Catt  suspect arson after a recent spate of local racist attacks against Asians. Two local skinheads are initially suspected. Then a rejected non-Asian boyfriend. But set against a background of family feuds and passions - not to mention religious fervour within the victim’s extended family, it soon becomes clear that things are not all they seem.

With Casey’s politically correct Superintendent forever breathing down his neck, an interesting picture also emerges of the many problems faced by police officers dealing with serious crime in such sensitive areas. Add to that, Casey’s own colourful hippie parents, who turn up out of the blue and take over his home.

This well-researched book, with its unexpected twists and turns and intriguing plot, maintains a good pace throughout and kept this reader guessing until the last page. Excellent characterisation and wry humour combine to make this a very enjoyable read for all crime fiction fans. Highly recommended.
----
Reviewer: Edna Jones

Geraldine Evans is a British writer of police procedurals that contain a lot of humour and family drama.  Her eighteen strong Rafferty & Llewellyn series features DI Joe Rafferty, a London-Irish, working-class, lapsed Catholic, who comes from a family who think - if he must be a policeman - he might at least have the decency to be a bent one. Her Casey & Catt series (two books) features DCI 'Will' Casey, a serious-minded, responsible policeman, for whom the Sixties never died, irresponsible, drug-taking, hippie parents, pose particular problems of the embarrassing kind. Geraldine lives in Norfolk, England. 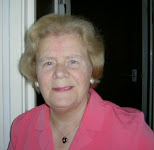 Edna Jones has been writing novels, articles, book reviews and short stories for some years. Using the pseudonym Clare Dawson for crime novels and short stories, a few other pseudonyms had been used for romantic fiction etc. Born in the West Midlands she has had a variety of jobs, is now retired and lives in Cambridgeshire. She has had two crime novels published (one as an e-book) and several short stories in various anthologies and magazines here and abroad. Single. As well as reading, enjoys outdoor life, travel, and crosswords.
Posted by Lizzie at 14:55