‘Bad For Good’ by Graham Bartlett 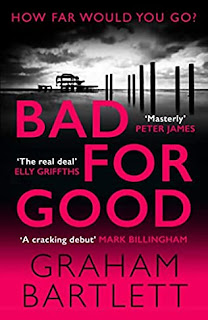 Phil Cook has spent most of his thirty-five years in the Brighton and Hove police division rising from PC to Chief Superintendent. Despite the worry about his wife Ruth currently going through Chemo, he is thrilled that his son Harry is in line for a Professional footballing contract.

But all is not well in the area. The drug situation is well organised and rapidly growing out of control.

When his son is murdered walking home from school, Phil’s life falls apart. Detective Superintendent Jo Howe heads the investigation into the killing.  Jo Howe is sensitive to the situation she finds herself in – taking over Phil’s job with the added stress of finding the killer of his son.

But it soon becomes clear that there are other forces at work. The police are over worked and short on manpower, so responding to a call-out can take a considerable time. As Jo looks into this, she learns that there is a vigilante group operating in the area that turn up to trouble spots ahead of the police. But are they a force for good?

This is a story of power, blackmail, and that added complication of police corruption, with a level of violence that is a sad reflection on today’s society. 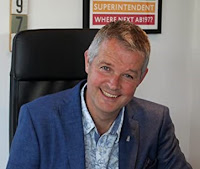 Graham Bartlett  was a police officer for thirty years, mainly policed the city of Brighton and Hove. He rose to become a Chief Superintendent and its police commander. He started writing when he left the police in 2013 and, almost by accident, became a police procedural and crime advisor, helping scores of authors and TV writers to achieve authenticity in their drama. Graham runs online crime writing workshops and courses with the Professional Writing Academy and deliver inputs to Masters programmes at the University of Cambridge and the University of East Anglia as well as at the Crime Writing Certificate programme at West Dean College. He I live in Sussex with his wife Julie. His debut crime novel, Bad for Good was published 23 June 2022.