‘Shoot the Moonlight Out’ by William Boyle 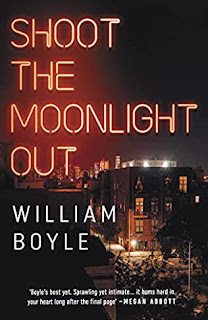 Published by No Exit Press,
24 March 2022.
ISBN: 978-0-857320-493-3 (PB)This novel opens in 1996, with two Brooklyn teenagers, Bobby and his friend Zeke, throwing rocks at cars. A girl is hit and killed. Five years later, Bobby’s former stepsister, Lily, has returned from college determined to be a writer. The evening class she starts through the local church includes Jack, father of the girl who died.

The story moves from character to character, a chapter each, and every one is convincingly brought to life through their actions, memories and surroundings. Jack lost his wife, parents and daughter within a few years and his house is crumbling around him, with Amelia’s room left untouched until fears of a former boyfriend stalking her brings Lily to use it. Another key character, Francesca, living with her grieving mother and impossible grandmother, is trying to reconnect with the world of her dead father in the downtown Brooklyn he loved, and she meets Jack there; she also meets Bobby, now working for a small-time swindler who’s protected by a mob boss. The interplay between the characters as tragedy becomes inevitable is compelling, and the atmosphere of this part of Brooklyn is beautifully evoked, with its constant links of church, family connections and shared schooldays. There’s humour among the sad reality of so many lives, and a sense of hope too. The ending is completely satisfying.

A haunting, atmospheric crime novel of the consequences of an ill-considered action. Superb.
------
Reviewer: Marsali Taylor

William Boyle is from Brooklyn, New York. His debut novel, Gravesend, was published as #1,000 in the Rivages/Noir collection in France, shortlisted for the Prix Polar SNCF, nominated for the Grand Prix de Littérature Policière and shortlisted for the CWA John Creasey New Blood Dagger. Boyle is also the author of the Hammett Prize-nominated The Lonely Witness (No Exit Press), a book of short stories, Death Don't Have No Mercy and another novel, Tout est Brisè, released in France by Gallmeister. A Friend is a Gift You Give Yourself was published to enormous praise, it was an Amazon Best Book in 2019. He lives in Oxford, Mississippi.