‘The Vatican Secret’ by David Leadbeater 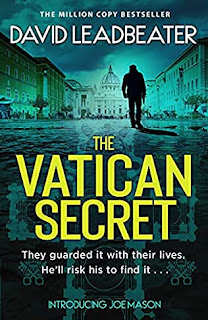 Overused though they undoubtedly are, the terms fast-paced and action-packed might well have been coined for this book. From start to finish The Vatican Secret roars along embracing almost every kind of chase, subterfuge and transport known to man - foot, car, boat, helicopter, planes...

Joe Mason, English and ex-army, and Roxy Banks, American and ex-CIA set off for Rome to guard two academics, Prof Rusk and his daughter, Prof Sally Rusk. Neither Joe nor Roxy expects any excitement. But that is what they get after they witness Professor Rusk being assassinated whilst he’s examining the Vatican’s ancient Book of Secrets in the heavily guarded Vatican vaults. The professor’s killer was engaged by the Amori, an ancient secret society. They have stolen the precious document with the aim of revealing its secrets, including the possibility that the Vatican has been concealing the truth about Jesus Christ and manipulating its followers for a couple of Millenia.  Their ultimate aim is to shock the world and destroy the Catholic Church.

Sally is desperate to stop the Amori and to retrieve the book. Mason and Roxy, who are both busy chasing their own demons, agree to help Sally trace the Amori, retrieve the book and prevent its secrets from becoming public.  By doing this they hope that they might gain atonement for past misjudgments and failures.  They are joined in their quest by an American infiltrator, ex-cop, Hassell, and Quaid, sometime Casanova, ex-army, and fixer par excellence. Hassell had helped the Amori steal the book but changed sides when he saw how badly they behaved. It is hoped he can be trusted.

Finding the Amori and getting the book back is no easy task.  In the space of just three days the quintet must find and then solve five riddles which are distributed in five different churches around the Middle East, Paris and Venice.  At every twist and turn they are attacked and hampered by The Amori who have influence over businesses, police, and armies, including that of the USA. It seems impossible that the main participants will survive being routinely shot at, knifed, strangled etc and live to tell another tale – or maybe to continue with this one?

Despite being superheroes, Mason et al come over as likable, if tortured and flawed, characters. I look forward to hearing what the future holds for them, both personally and professionally.
------
Reviewer Angela Crowther. 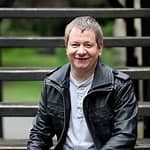 David Leadbeater is the Kindle International Bestselling author of 4 books - all in the Matt Drake series. He was born in Pontefract, U.K., and grew up in Stockton-on-Tees and York. He reads all kinds of fiction and has been writing since he was fifteen. He lives in York, U.K. and is married with two beautiful daughters and is currently hard at work writing the next Matt Drake novel. He loves to interact with readers and welcomes all genuine contact through social media or email.

Angela Crowther is a retired scientist.  She has published many scientific papers but, as yet, no crime fiction.  In her spare time Angela belongs to a Handbell Ringing group, goes country dancing and enjoys listening to music, particularly the operas of Verdi and Wagner.
Posted by Lizzie at 17:27