‘The Final Round’ by Bernard O’Keeffe 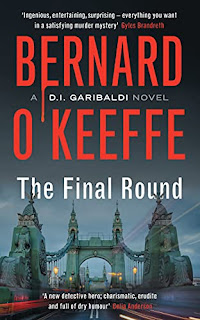 
Melissa, Greg, Fay, Julia, Nick and Chris all met at Oxford University. Over the years since they graduated, they have seen little of each other. Although they always meet up for the annual quiz organised by Melissa.  From a small group occasion this has grown to a large event, The Melissa Matthews Charity Quiz, held at the Ocean Bar. And this year is the 25th anniversary.

As with many groups of people who meet when they are young, some have done better than others financially. Melissa and Greg are now married, she is a TV news presenter and Greg is a famous writer. Fay is head of a prestigious school which Melissa’s daughter Lauren attends. Julia is a lawyer, Chris, a journalist, and Nick.....well no one is quite sure what Nick does, but whatever it is he is a known charmer, particularly where women are concerned.

What becomes apparent is that none of them really like each other, and there is a distinct feeling of inferiority by the two spouses of Julia and Chris who didn’t attend Oxford. Feeling also run high between Melissa and Julia, for Julia’s daughter Helena has got into Oxford, and Lauren hasn’t. One upmanship at its worst.

The quiz goes off in the usual way except that at the end a woman’s voice is heard above the buzz of conversation announcing a final round of questions in honour of the six friends who started the quiz. All required is to work out which of them is true.

Two weeks later, the morning after Boat Race Day, a man’s body is found beside the Thames. He has been stabbed and has an Oxford college scarf stuffed in his mouth.

The investigating Detective Inspector is Jim Garibaldi, an interesting character, who doesn’t drive so uses either a bicycle or the bus to get around, or his DS Milly Gardener drives him. He is divorced and has one son, Alfie. Things with his ex-wife are strained mainly owing to differences where Alfie is concerned. Milly Gardner is also divorced. Despite their relatively long and good relationship as a team, they don’t really seem to know each other. There are glimpses of their feelings, but they are restrained and quickly put back in their box.

When the body is identified it brings to Garibaldi’s attention the allegations about Melissa Matthews and her Oxford friends that were made in the unexpected final round of the quiz.  These ranged from plagiarism, bribery, shoplifting to sextortion and murder...

So, who was the mystery person who set the cat amongst the pigeons?  Who is guilty of one of the allegations made and would he/she kill to ensure that it doesn’t come to light?

I love a good mystery and this one will keep you guessing. Clever, intriguing, and ingeniously plotted. Highly recommended.
------
Reviewer: Lizzie Sirett

Bernard O'Keeffe worked as an English teacher, most recently at St Paul's School in Barnes, where he currently lives. He has previously written one Young Adult title.