‘No Lift and No’ Stairs by Ian Hay 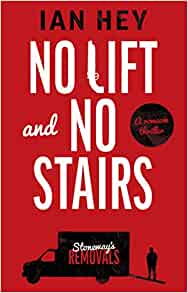 Peter Booth is a 38-year-old Hawkwind fan and Stoneway's removal porter.  He is frankly a bit of a nerd.  He has recently split up with his long-time girlfriend Sarah and is now living in a small studio flat rather unhappily, drinking too much and losing any self-confidence he once had.

The novel dwells on his daily routine at Stoneways and his fellow workers at the Removal Firm.  His interest in the most recent recruit to the firm - an attractive young woman called Emily - promises the likelihood of romance but through his association with her he unwittingly finds himself dragged into an underworld of blackmail, crime and murder.

This follows the discovery that Emily's ex-partner is Ray Henderson a notorious local crime lord.  The dialogue is both funny and realistic although the characters are frankly rather odd.

Can Peter eventually succeed in extricating himself from the criminal gang in the rather extraordinary circumstances that he finds himself?  And will his relationship with Emily be all he hoped for?

Anyone involved with the Removal trade would find this story interesting and I certainly found myself smiling at several points during the read.  A worthwhile first novel.
-------
Reviewer: Toni Russell

Ian Hey started writing in earnest, after his partner mentioned in 2007, that his writing was funny.  Since then, he has had three of his One Act plays performed at The Cornerhouse in Tolworth, Surrey as part of their One Act Festival. No Lift and No Stairs is his debut novel. Ian now lives on the south coast with his partner and Lola, their wire-haired dachshund. 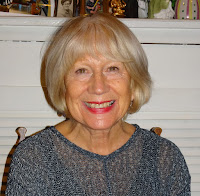 Toni Russell is a retired teacher who has lived in London all her life and loves the City.  She says, ‘I enjoy museums, galleries and the theatre but probably my favourite pastime is reading.  I found myself reading detective fiction almost for the first time during lockdown and have particularly enjoyed old fashioned detective fiction rather than the nordic noir variety.  I am a member of a book club at the local library and have previously attended literature classes at our local Adult Education Centre.  I am married with three children and five grandchildren.