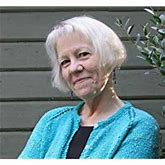 Marty Wingate is a Seattle-based author and speaker about gardens and travel.
She is the author of a series of Potting Shed Mysteries the first of which
The Garden Plot, was published by Alibi, in May 2014.
There are now eight books in the series.
She leads garden tours to European and North American destinations.
In 2015 she started a second series, Birds of a Feather.
Her latest series is the First edition Library series. The books are set in the lovely Georgian spa town of Bath. There are three books in the series.
Marty is a member of Sisters in Crime, Mystery Writers’ of America, and the Crime Writers’ Association (Britain) as well as the Royal Society for the Protection of Birds and the Royal Horticultural Society.

Lizzie: Marty, you published your first book in the Potting Shed Mysteries series, in 2014. Since them you have written fifteen further mysteries spread over three series, and one historical entitled Glamour Girls published in 2021. Your latest book published August 2022, The Orphans of Mersea House, is also an historical book set post WW11.  Can you tell us a little about it?  And what prompted your interest from contemporary crime fiction to historical novels.

Marty: The Orphans of Mersea House is set in 1957 Southwold, on the Suffolk coast, and tells the story of a ragtag group of people all with various stories in their past and very little to look forward to. They live in aboarding house (Mersea House), run by Olive Kersey and owned by her lifelong friend, Margery Paxton. Olive and Margery haven’t seen each other in 15 years and use their childhoods as a bridge to getting along. One day practically out of the blue as far as Olive is concerned, an eleven-year-old girl—a polio victim at a young age—arrives on the doorstep. She is Margery’s ward, although the two have never met. Then follows the lives of Olive, Margery, the girl, and the other boarders as well as town residents through the spring and summer of 1957.

Lizzie: Did you find it more challenging writing stories set in the past. Is there more research required? Marty: Lots of research, which is always fun. 1957 isn’t too far away and so I was able to talk with friends who, for example, remembered taking the Eleven-Plus exam. I remember getting the polio vaccine (viasugar cubes) in the early ’60s in the States. Years ago, I worked with moderately and severely physicallyhandicapped children and knew adults who had had polio, and so could draw on those experiences and memories. Isubscribe to the British Library’s online newspaper archive, which is helpful, and made copious use of Radio Times’s online archive.

Lizzie: Are the main characters in your books all pure fiction, or based on people that you have come across?
Marty: Both. I am often inspired to create characters based on people I know or even people I see walking down the street. The thing about that is, sometimes that very person doesn’t see his or herself when the character actually appears on the page. I based a character in my Birds of a Feather series on a dear friend—I described what she looked like (tall and lithe with curly black hair shot with silver), how she moved (like a dancer), and how she could eat anything and stay slim (her only annoying quality!). My friend read all the books and then said to me, “Which one is me?”

Lizzie: What triggers the idea for a new book?   Something that you see or read about, or a personal experience ….?

Marty: Often it’s an event or a person. In the case of The Orphans of Mersea House, I was drawn to life in post-WW2 England (quite different to the US, where things were pretty much full speed ahead). Also, 1957 seemed rather on the cusp of social change: although the Wolfenden report recommended in 1957 thathomosexuality be decriminalised, it didn’t happen until 1965. Women-owned businesses were not all that common. A 37-year-old unmarried woman would likely stay that way. And the ramifications of polio lasted for decades.

Lizzie: I see from your website that you are a former how-to garden writer of three books and a countless magazine and newspaper articles on the subject.  What prompted you to combining your gardening knowledge and crime fiction?  Although as I have listened to The Archers for 70 years, I know just how serious a village community takes the annual Flower and Produce show. Could easily lead to murder. 😊
Marty: I “blame” my entry into fiction-writing on a friend who suggested to me that I should write a garden-based mystery series. It took almost a year of gentle prodding, but finally I thought, well, why not? There are eight Potting Shed mysteries out, and the ideas are still coming!

Lizzie:  Your latest series is the First Edition Library series which are set in Bath, England.  I know that you hail from Seattle in the US. Is there a particular reason why you chose Bath?  I know it’s a beautiful place but so are many others, so why Bath?
Marty: The easy answer is because I love Bath, but I have other reasons, too. Bath is a literary place, but it isn’t associated with any particular Golden Age of Mystery author, and so I could write each book threading elements from any of the many possibilities. Also—a practical reason for a writer—I had one series set (mostly) in Hampshire and one set in Suffolk. I was looking for new ground.

Lizzie: Do you plan your books, or have an idea – start off and see where it takes you?
Marty: I spend a great deal of time thinking about story ideas, but I don’t write an outline or a first draft. I jot down notes, write a list of characters, and almost always know where I’m going (although I’m not against following an intriguing idea that I have dashed off). My practice is to write, revise and edit what I’ve written, and then continue to write more, revise and edit. This way by the end of the book, the manuscript is pretty much finished. (Ha—until my editor gets hold of it!)

Lizzie: Are you a disciplined writer i.e. do you write for a certain number of hours each day, or set yourself a target of x amount of words?
Marty: I write best in the morning. I will write new material for a couple of hours, but then must go back and edit (usually that afternoon). I do set myself word count goals (“I will reach 40,000 words by Saturday!”), and quite often, I actually meet that goal. I like deadlines, even self-imposed ones.

Lizzie: When embarking on a new book, what area of the book challenges you the most?
Marty: I want to make sure that the story is heavy enough. I don’t mean not humorous, because I write a lot of humor, so perhaps what I really should say is that there should be enough layers and threads and
connections that it’s a satisfying finish.

Thank you for chatting to us Marty. We look forward to hearing more about the new series.

Marty’s books in order are: