‘The Bay’ by Allie Reynolds 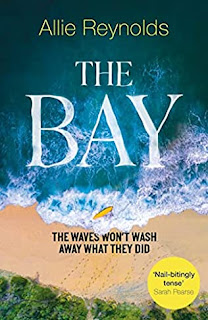 A small cove and campground several hours’ drive from anywhere; a hard to negotiate road in and out; no internet or phone access; seven people drawn together by a common interest. Sounds like a modern take on a good old-fashioned country house mystery, doesn’t it?

In many ways that’s exactly what Allie Reynolds’s second novel is – but it has a lot more to offer besides. At times I felt I was learning a whole new language: the one spoken by dedicated surfers, who are so devoted, almost addicted, to their sport that their sole purpose in the off season is to earn enough money to enable them to surf whenever conditions permit.

Kenna arrives in Australia to attend her best friend Mikki’s wedding, and soon finds herself entangled in a situation which throws up one question after another. Along with Jack, Mikki’s fiancé, they travel to remote Sorrow Bay to join a group of surfers who call themselves The Tribe. No one is very forthcoming about family or background, and Kenna soon starts to wonder if something a little sinister lurks behind the camaraderie, especially when she realizes that leaving the Bay at the end of her stay in Oz will be far from straightforward.

Like the best mystery novels, the real mystery lies with the characters, who all come to vivid life as the story unfolds. Jack’s throwaway bonhomie masks physical pain and frustration. Mikki has changed from the cautious teenager Kenna remembers to a young woman who sees risky activities as a challenge. Clemente is hostile, yet vulnerable. Ryan is just hostile. Victor’s ebullience sometime erupts into violence. And Sky, the self-styled group leader, pushes everyone including herself way beyond their comfort zone.

Questions arise and secrets are unravelled against a background of glorious but perilous scenery and waves any surfer would die for – and possibly kill for. The landscape, the sea, the changing weather combine to create a shifting atmosphere which both reflects and enhances the uneasy relationships and emotional see-saw. Eventually most of the questions are answered, though whether justice and resolution prevail as they should in a mystery novel is open to question.

Most important of all, long before the fifty-page landmark, I didn’t want to stop reading, and it became harder and harder to put the book down when real life intervened. And that has to be the mark of a good mystery novel.
------
Reviewer: Lynne Patrick

Allie Reynolds is a former freestyle snowboarder who spent five winters in the mountains of France, Switzerland, Austria, and Canada. Her short fiction has been published in women's magazines in the UK, Australia, Sweden, and South Africa. Born and raised in Lincoln, England, she moved to Australia in 2004. She lives on the Gold Coast with her two young boys and a cat who thinks he's a dog. Shiver is her first book.