‘Murder at the Pub’ by Jane Adams 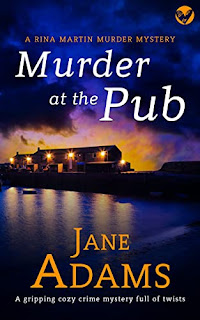 Frantham on Sea used to be a quiet, sleepy type of village, but since Mac (Detective Inspector McGregor) arrived a few years ago, he has had one murder after another to solve. This seems mainly due to the activities of a Travis Haines, suspected head of organised crime and Igor Vaschinsky thought to belong to the Russian mafia. There is a worry now that they are about to join forces.

Meanwhile out on the old local airfield, which is soon to be reopened, an archaeological dig turns up bones that are only a few years old. However, the skeleton is not complete. The remains are jumbled up together, as if they have been reburied from somewhere else.

Local resident, Rina Martin, retired actress and ex-television sleuth, is really interested and with newly qualified police constable Andy Nevine, starts to go back over the names of locally missing women from the last few years. This turns up quite a surprise for Andy, involving an old acquaintance. Mac leaves Andy to investigate on his own, as he has his work cut out, with a fatal stabbing outside a local pub.

Kendal of Dorchester Head Quarters and friend of Mac’s, immediately suspects Haines or Vaschinsky, as the dead man worked for Haines. Could one of them or their men be responsible? Mac is not so sure, as a certain Karen has returned, known by him to be responsible for past murders. She has been heard to say she is back in Frantham for “unfinished business”. He is certain she has something to do with the murder as she also has connections to Haines and Vaschinsky.

Then there is another murder, could Karen be responsible, or one or both of the other two suspects?

Mac and the team, with the help of Rina of course, are more determined than ever to bring down the main suspects and return peace to the once sleepy Frantham.

Another delicious crime story from Jane Adams. I shall never see that part of the Dorset coast again in the same light!  Once again. I loved the characters of Rina and Mac and their interactions, and have no hesitation in recommending Murder at the Pub highly.
------
Reviewer: Tricia Chappell 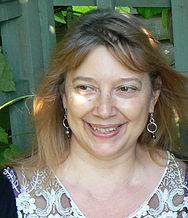 Jane Adams  was born in Leicestershire, where she still lives. She has a degree in Sociology and has held a variety of jobs including lead vocalist in a folk rock band. She enjoys pen and ink drawing; martial arts and her ambition is to travel the length of the Silk Road by motorbike. Her first book, The Greenway, was shortlisted for the CWA John Creasey Award in 1995 and for the Author's Club Best First Novel Award. Jane writes several series.  Her first series featured Mike Croft. Several books featuring DS Ray Flowers. Seven titles featuring blind Naoimi Blake, and six titles featuring Rina Martin. Her most ret series is set between the two World Wars and featuring Detective Inspector Henry Johnstone and his sergeant, Micky Hitchens. Jane has also written several standalone novels. She is married with two children.

Tricia Chappell. I have a great love of books and reading, especially crime and thrillers. I play the occasional game of golf (when I am not reading). My great love is cruising especially to far flung places, when there are long days at sea for plenty more reading! I am really enjoying reviewing books and have found lots of great new authors.
Posted by Lizzie at 13:34