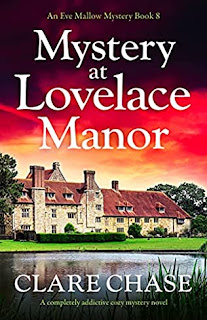 Eve Mallow has now settled into life in the village of Saxford St Peter in Suffolk, following her move from London and divorce from her controlling husband.  She earns her living as an obituary writer. It is her style to learn everything she can about the deceased which evolves interviewing the people who knew the person throughout their life, which has resulted in her turning into an amateur sleuth.

Our story opens with the annual event at one of the oldest grand old, moated houses that dates back to medieval times, although a later added wing is Tudor. Lovelace Manor is just a few miles from Saxford St Peter. The current owner is Diana Pickford-Jones.  The annual event is associated with the love story of Diana and her half-brother Sebastian’s great-grandparents Louisa Lovelace and the then gardener Seth Pickford.  They had fallen passionately in love and eloped. And so, each year their love story is celebrated.

Diana has this year invited the famous TV celebrity Cammie Harrington, who is planning a stunt with a hot air balloon.

Along with busybody Moira from the post office and Viv who runs the local café where Eve works part time, and several others, Eve jumps at the chance to volunteer to help get everything ready for the big day. It also gives her a bird’s eye view of what is happening. Is she nosy? Who Eve? Perish the thought.

But soon it becomes clear that there are many tensions bubbling beneath the surface of this pleasant day.  And when the day turns into disaster as the hot-air balloon catches fire the question is ‘Was this an unfortunate accident’ or was it orchestrated?  If so, is there a killer at Lovelace Manor?

With her ear to the ground Eve learns that all was far from well between Diana and Cammie, who were once like mother and daughter, and half-brother Sebastian who is expecting to inherit the manor from Diana, but does she have other ideas. Into this mix comes Raven, the storyteller, who seems at odds with everyone, including Josh Standish the gardener. I wonder why?

This is an intriguing mystery I veered from character to character trying to work out just who was killer.  Another murder didn’t help it just had me even more confused.  And how do the Lovelace missing heirlooms fit in? Like all good mysteries one must look to the secrets of the past to unravel the problems of the present.