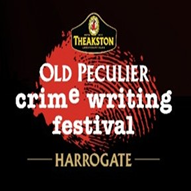 Harrogate, 21 July 2022: Mick Herron has been announced as the winner of the Theakston Old Peculier Crime Novel of the Year 2022, presented by Harrogate International Festivals, for his crime novel Slough House.

The seventh instalment in the bestselling series of the same name, Slough House follows a band of failed spies who have been exiled far from power but find themselves drawn to action as a populist movement hits the streets of London and a Russian spy mission inadvertently results in the death of a British citizen. This year marks Herron’s first time winning the award after five appearances in the shortlist in just six years and follows the launch earlier this year of Apple TV’s acclaimed adaptation of his series, Slow Horses, which stars Gary Oldman and Kristin Scott Thomas. Herron receives a £3,000 prize, as well as a handmade, engraved beer barrel provided by T&R Theakston Ltd.

Mick Herron said on winning Theakston Old Peculier Crime Novel of the Year:
“This is the most coveted trophy in the crime writing community and I couldn’t be more thrilled to have won it.”

The announcement was made at The Old Swan Hotel in Harrogate,
during the opening ceremony for
Theakston Old Peculier Crime Writing Festival (21 – 24 July)