‘In Deep Water’ by Christobel Kent 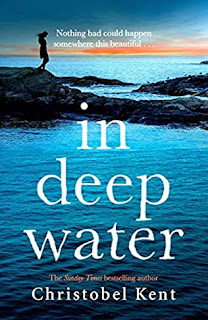 Some psychological thrillers start slowly, lull you into a sense of security, then gather pace for the final punch. Others make you want to yell warnings at the protagonist right from the very first page. Christobel Kent is a master of the second kind.

Sukie has taken up online dating. That’s the first alarm bell. Her decision to take off to a remote Greek island with a charming older man she has known for only a few weeks sets sirens screaming and red lights flashing. And then there’s Heather. She sees Sukie at the airport, recognizes the man, and knows there’s trouble ahead – so what does she do but book herself on to the next flight to the same destination. They’re both young women damaged by something in their past, Sukie by an overbearing mother who has wrecked her self-confidence, Heather by a violent rape when she was a teenager which she never told anyone about. Prime candidates for emotional disaster.

It’s plain from the outset that Sukie is riding for a fall, and Heather isn’t far behind. Fortunately, they both have friends. Less fortunately, they haven’t told those friends what they’re doing. The result is a tense chiller of a novel, laden with atmosphere, and full of cliff-hanger moments which are enhanced by the layered, multi-viewpoint structure of the narrative. There’s Sukie, trying hard to convince herself that everything is OK. Heather knows it isn’t but has no idea what to do about it. Back in England, Sukie’s friend Joey tries desperately to work out who the man is and where he has taken Sukie. And Kit, Heather’s usually steady and down-to-earth boyfriend, goes well outside his comfort zone to try to work out what’s going on. Even flamboyant Marsha, who has never had any faith in Sukie, has a part to play in her daughter’s fate.

The Greek islands of fiction are usually all blue seas, pretty coves, sparkling sunshine and charming tavernas. Not so this one; Kent makes no attempt to dress it up as a desirable holiday resort. The accommodation is little better than a shack, the bars are run down, the sea is fog-bound, and the hillside is a rubbish dump. And Greece in March is as damp and shivery as Britain.

This is the kind of book that makes you hold your breath and clench your muscles almost from the first page. OK, it’s mystery fiction, and good usually triumphs over evil – but will it this time? Read it and see.~
------
Reviewer: Lynne Patrick

Christobel Kent was born in London in 1962 and now lives in Cambridge with her husband and four children; in between she lived in Florence. She worked in publishing for several years, most recently as Publicity Director at Andre Deutsch. Her debut novel A Party in San Niccolo, was published in 2003. Since then she has published sixteen further books.

Lynne Patrick has been a writer ever since she could pick up a pen, and has enjoyed success with short stories, reviews and feature journalism, but never, alas, with a novel. She crossed to the dark side to become a publisher for a few years and is proud to have launched several careers which are now burgeoning. She lives in Oxfordshire in a house groaning with books, about half of them crime fiction.
Posted by Lizzie at 15:17