‘The Life of Crime’ by Martin Edwards 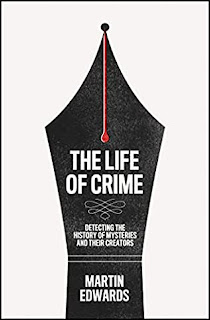 The Life of Crime is described by the author as a book whose purpose is ‘Detecting the History of Mysteries and Their Creators’ and this is what it succeeds in doing in an immense volume that traces the history of crime fiction with fascinating information about many of the authors that made an impact on the genre. It is a complex and comprehensive book, consisting of over six hundred pages, which begins at the end of the 18th Century with William Godwin’s novel that ‘explored the unravelling of a crime’, this was originally called Things As They Are but is now known by its later title The Adventures of Caleb Williams.

Edwards makes an effort to keep the events he is portraying in chronological order, but he has also arranged the book in fifty-five chapters, which all have different themes that lead smoothly into each other. At the end of each chapter there are detailed footnotes, which offer more information about the theme and name other authors whose writing the reader may be interested to explore. The authors featured in the earlier chapters of the book include an exploration of the unique contributions to crime fiction made by influential British authors like Wilkie Collins, Charles Dickens, Arthur Conan Doyle, E.W. Hornung, G.K. Chesterton, R. Austin Freeman, Francis Iles and, of course, the Queens of Crime: Agatha Christie, Dorothy L. Sayers, Margery Allingham, Josephine Tey and Ngaio Marsh (the latter was born and bred in New Zealand but her detective was English and the majority of her books were set in England).

The Life of Crime traces the history of British crime fiction from these early writers, some of whom continued to publish novels for decades after the Golden Age, through to more recent practitioners such as Ruth Rendell (who also wrote as Barbara Vine) and P.D. James. In the chapter that covers historical crime fiction, the author considers the work of Ellis Peters, who introduced the now popular concept of a monk as a detective; and Peter Lovesey, who for over five decades has been the innovative author of both historical and contemporary crime. In my opinion, it was fitting that Edwards’ final words in the book were a quote from the magnificent Reginald Hill, best known for his creation of the novels that featured Dalziel and Pascoe, which combined complex subtlety of character with lively wit and broad humour.

In parallel with the British practitioners, Edwards discusses the development of American crime fiction, beginning with Edgar Allan Poe and covering authors such as S.S. Van Dine and the collaboration that was Ellery Queen, as well as the dark crime novels of Patricia Highsmith. He also discusses very different schools of fiction, including the Had-I-But-Known school headed by Mary Roberts Rhinehart and the hard-boiled authors such as Raymond Chandler and Dalshiell Hammett.

As well as crime fiction in the U.K. and the U.S. this wide-ranging and ambitious book traces the origins and development of crime fiction throughout the world, with a chapter on Georges Simenon and European crime fiction and another on Scandinavian crime fiction, as well as excursions to many other countries. This provides the reader with the information that will allow them to explore the crime fiction tradition in diverse other cultures.

It would be easy for such a comprehensive history to become bogged down in detail, but the author avoids this by the skilled use of themes and comprehensive footnotes, and more than that by vivid and penetrating descriptions of the authors’ backgrounds and crucial incidents in their lives. Edwards uses his considerable narrative skills to bring to life many of the authors he is investigating, which often helps to elucidate the influences that shaped their writing.

The Life of Crime is an excellent reference book, which will prove invaluable to anyone with an interest in the history of crime fiction. However, this book is far more than just a simple reference book because it provides insights into the deeper themes of the genre and the lives and motivations of the authors. Above all, it is an engaging and fascinating read. I would recommend this as an excellent investment for anyone who would like a comprehensive but accessible book on this subject.
------
Reviewer: Carol Westron

Martin Edwards received the CWA Diamond Dagger, the highest honour in UK crime writing, in 2020. He has been described by Otto Penzler as ‘the best living practitioner of the classic detective story’ and by the British Library as ‘the leading expert on classic crime’. He is the author of twenty-one novels, including Gallows Court and Mortmain Hall. His latest book is The Life of Crime, a history of the crime genre, and he also conceived and edited Howdunit, an award-winning masterclass in crime writing by members of the legendary Detection Club. He has received the Edgar, Agatha, and Poirot awards, two H.R.F. Keating awards, two Macavity awards, the CWA Margery Allingham Short Story Prize, the CWA Short Story Dagger, and the CWA Dagger in the Library. He has been nominated for CWA Gold Daggers three times and once for the Historical Dagger; he has also been shortlisted for the Theakston’s Prize for best crime novel of the year for The Coffin Trail. He has created the Golden Age detection mystery map This Deadly Isle and an online course for crime writers: www. craftingcrime.com  As consultant to the British Library’s Crime Classics series, archivist for the CWA and Detection Club, and well-known blogger, he has been responsible for the rediscovery of many long-forgotten Golden Age authors and novels. A former chair of the CWA, he has since 2015 been President of the Detection Club. His novels include the Harry Devlin series (the first of which, All the Lonely People, was nominated for the CWA John Creasey Memorial Dagger) and the Lake District Mysteries. He has published nine non-fiction books and seventy short stories and edited more than forty anthologies of crime writing which have yielded many award-winning stories. 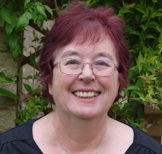