‘Footprints of The Devil' by Olive Etchells 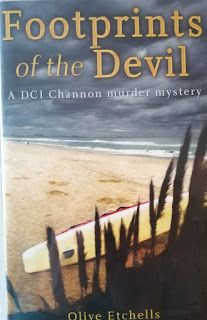 Published by Constable,
30 March 2006.
ISBN: 978-1-84529-159-4 (HB)      One minute championship surfer Dave Tregenza is in a bar in Hawaii, and the next, following an overwhelming urge, he is on his way home to Cornwall after an absence of seven years. When he arrives, it is to find that his brother Jonathan has disappeared without trace.

Both his Aunt Frances and his sister-in-law Delphi are pleased to see him, and he quickly makes friends with his two nieces.  Slowly his reasons for so long an absence from home are revealed but Dave is older now and maybe, as we all experience, things look different after a passage of time.

When Jonathan’s body is found, DCI Channon and DS Bowles are assigned to the case - as compatible as chalk and cheese. Whereas Channon has a sympathetic approach, Bowles is more likely to clap them in handcuffs and ask questions later.

The beach where Jonathan’s body is found is just a few miles from the huge satellite earth station at Goonhilly Downs.  Living in close proximity are Alan Dancer and his wife. Both are questioned, and although something seems slightly out of kilter to the investigating officers, little progress is made until a second murder steps up the investigation.

The book has a marvellous sense of place - Cornwall is my adopted home. There are many villages like Porthmenna. I loved this book; I could not put it down. Highly recommended.
-----
Reviewer: Lizzie Hayes

Olive Etchells was born in Lancashire, England. She has been writing for many years and is best known for her Jericho Rose Lancashire sagas.