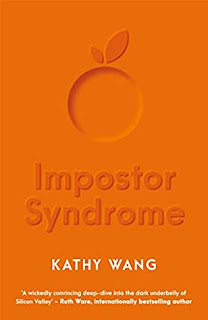 In 2006 a Russian orphan, Julia, is identified by an officer of the SPB (State Protection Bureau) to train as a spy for her country.  The officer, Leo, monitors her progress and when she infiltrates the USA, he becomes her handler.

By 2018 she is embedded within American society and has risen to become Chief Operating Officer at a social media and internet company called Tangerine.  This role enables her to interrogate the system server, access data from the millions of people who subscribe to the site and pass personal information about users to the SPB when requested to do so.  Recently, however, Leo’s demands are becoming increasingly risky, and Julia is worried that her activities will be found out.

Alice’s situation is in stark contrast to Julia’s.  Recently dumped by her long-term boyfriend, she is stuck with the flat they shared, but without his half of the rent.  She needs her salary to keep her head above water, so, when a reviewer from human resources criticises her lack of “soft skills” and suggests it amounts to underperformance she tries to prove her worth by focusing on her technical expertise.  Alice becomes more attentive when looking for signs of unusual online activity and the hard work pays off.  She discovers high activity levels in “Server 251” and begins to dig deeper.  It is not until later that she realises she is on a collision course with, you guessed it, Julia!

Julia and Alice are fascinating, if not always likeable, characters and the lives of the two women lie at the heart of the narrative.  Their situations seem to be poles apart, and yet both have roots in different cultures, both experience discrimination because they are women, and both lack autonomy.  As the elusive truth is slowly revealed, Alice and Julia try to find a way through personal and professional challenges that may prove to be as dangerous as they are difficult.

Within this human story Kathy Wang also explores power, inequality and the pervasive influence of social media.  Agents from the murky worlds of espionage and criminality sift through stolen data to gain advantage for themselves or their causes.  Private information, thoughts and actions stored on silicon chips can become weapons in the hands of the wrong people.

Impostor Syndrome is a satirical, political, and entertaining spy thriller.  It is written with style, humour and humanity.  An immersive and thought-provoking read.  Highly recommended.
-------
Reviewer: Dot Marshall-Gent

Kathy Wang  was born and raised in Northern California. She is a graduate of UC Berkeley and Harvard Business School. Her first novel Family Trust was published in 2018. Imposter Syndrome is her second book.

Dot Marshall-Gent worked in the emergency services for twenty years first as a police officer, then as a paramedic and finally as a fire control officer before graduating from King’s College, London as a teacher of English in her mid-forties.  She completed a M.A. in Special and Inclusive Education at the Institute of Education, London and now teaches part-time and writes mainly about educational issues.  Dot sings jazz and country music and plays guitar, banjo and piano as well as being addicted to reading mystery and crime fiction
Posted by Lizzie at 14:18