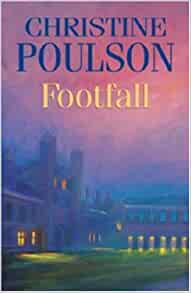 
Late leaving the college, late collecting her daughter, late home - dinner burning, daughter Grace shrieking, Cassandra James lets the telephone ring several times before she answers it, when she does there is a cry and then silence. Perturbed she goes to punch in 1471, but before she can do so the telephone rings again, but there is no one there, and the caller has withheld their number.

Next morning when she arrives at her office Superintendent Jim Ferguson is waiting for her and breaks the news that Dr Una Carwardine, had been found by her cleaner dead at the foot of the stairs, the last number dialled from her phone was Cassandra’s number. Cassandra is devastated - so busy trying to get her book on sisters on Victorian fiction finished before her deadline,  which is just two weeks away, she had put-off returning Una’s telephone messages, now it’s too late - what had she wanted to tell Cassandra?

The college had understood that Una, wife of the late writer Terence Carwardine,  had left her library of some 13 thousand books to Cambridge Literary and Philosophical Institute, but it appears that she had recently changed her will. Giles the head librarian is convinced it’s Cassandra’s fault. But Cassandra has no idea why, but is concerned at a number of other strange things that are happening, like the loss of her ring, and most perturbing of all the odd appearances of another Cassandra James!

The story makes compelling reading, as the reader is immersed in the daily lives of the characters, Giles, her ex-student Michelle, who is now Giles assistant, Eileen Burnham, owner of Burbham books, not to mention Bill Bailey, and Florence the Institute cat.  And of course her partner Steven and the lovely if increasingly noisy baby Grace. This is a marvellous entry in this excellent series, one of those books that you have to keep reading but hate to finish.  Highly recommended.
--------
Reviewer: Lizzie Hayes
Earlier books in the series are Dead Letters and Stage Fright.

Christine Poulson writes, she was a respectable academic, with a PhD in the History of Art lecturing at a Cambridge college before she turned to crime. Her first three novels featured literary historian and accidental sleuth, Cassandra James. Deep Water was the first in a series of medical thrillers featuring scientist Katie Flanagan. Her most recent is Invisible, a standalone suspense novel. She has written numerous short stories and in 2018 was short-listed for both the Margery Allingham Prize and the CWA Short Story Dagger.