‘The Ruins’ by Phoebe Wynne 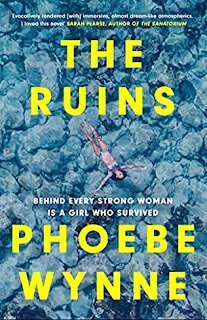 Set in the Summer of 1985, we meet the Ashby’s who own an inherited Chateau on the French Riviera.  They are as in previous years spending the summer there with their 11-year-old daughter Ruby.

The Ashby’s and their friends are regarded as minor aristocracy. They went to right schools and have retained the friendships that they made in their university years.

The first part is narrated by Ruby Ashby in 1985.  On the face of it, the French Chateau, in the glamour of the French Riviera during a hot summer sounds idyllic. But it is as far from that as one can get.

From Ruby’s perspective, when several of the Ashby's long-term friends from Britain arrive for a short stay, it provides her with two female friends around her own age, but the relationships are uneasy.

Very early on the reader becomes aware of the inappropriate behaviour of one of the male adults. It makes for uncomfortable reading.  As I read, I could not initially make up my mind whether the female adults couldn’t see what was happening because these were their friends from their university days – or couldn’t or wouldn’t accept what was in front of them.  Or if they were too wrapped up in themselves to actually notice, or maybe want to know.

Because the first part of the book is told from Ruby’s perspective, the reader is aware of an accident, but Ruby doesn’t actually know what has happened, but as you read on you can read between the lines. That all the adults have problems, and secrets becomes very clear. But that is no excuse to lose sight of what is happening to their children.

It’s a disturbing book and a couple of scenes, especially the one around the swimming pool I found particularly distressing to read.

The second part of the book is set in 2010, when one of the young girls, now grown returns to the chateau, in the hope that by being there she can lay to rest the demons that have beset her since that fateful summer in 1985.

Whilst this is not a comfortable book to read, I couldn’t stop reading it.  I guess I wanted justice.
------
Reviewer: Lizzie Sirett

Phoebe Wynne worked in education for eight years, teaching Classics in the UK and English Language and Literature in Paris. She is both British and French, and currently spends her time between France and England. Madam is her first novel.
Posted by Lizzie at 17:45