‘Dance With Death’ by Barbara Nadel 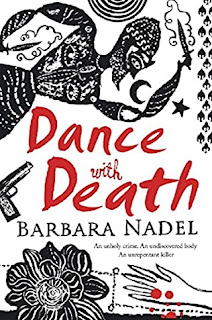 Dance with Death is the eighth in the Istanbul series written by Barbara Nadel.  Her detective is Inspector Cetin Imen.  He is an unusual detective, happily married to Fatma, a practising Moslem, with nine children and with some magical powers which he has inherited from his mother, who was an Albanian witch.

The background of Turkey, usually Istanbul, is vividly and, I guess, accurately described making it an essential part of the book.  Some history is built in and much atmosphere along with the uneasiness that exists in a mixed population of Moslems and Jews.  Customs, festivals, people's names, buildings and palaces, street names sound, and I guess are, authentic.

Some help is given to the reader in Dance with Death with a map of Turkey and a list of characters at the beginning of the book and with a glossary and alphabet at the end.

This is especially helpful in Dance with Death as the novel moves between two different centres, Istanbul and the contrasting Muratpasa, a remote village in Cappadocia which has a natural geological structure locally called Fairy Chimneys.  The story moves equally between the two centres, which have entirely separate crimes, characters, backgrounds and cultural attitudes.  Ikmen is the only connecting link as he leaves his family behind in Istanbul while he travels to Muratpasa, partly to solve a crime and partly to unravel a mystery in his romantic past.

With two plots and scenarios and the complications arising in each case, this makes a fascinating and compelling read.  Comparisons obviously spring to mind with Ian Rankin in Scotland or Donna Leon in Italy.  Barbara Leon has taken the reader into a world which she has experienced in greater depth than most of her readers.

Other characters in the book, besides Ikmen and his family, are described accurately and sympathetically, particularly Inspector Mehemet Suleyman and his wife Zelfa, a psychiatrist.Especially interesting is the way the author captures the complicated customs, beliefs and inbred characters in a remote village community.  At times I had to make reference to the list of characters and to the glossary of Turkish words, but this did not take away from my interest in the book.  I look forward to reading the ninth novel set in Turkey.
--------
Reviewer: Rosemary Brown
Other books in this series are: Belshazzar's Daughter, A Chemical Prison, Arabesk, Deep Waters, Harem, Petrified  and Deadly Web.  Barbara Nadel has also written three other novels: Last Rights, After the Mourning, A Passion  for Killing.