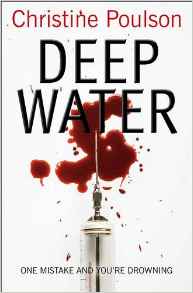 Patents lawyer Daniel, his wife Rachel and their daughter Chloe are at the end of a boating holiday when he receives the news that his ex-wife Jennifer has been killed in a car crash.  Before he can get his head around the news, he is called into his office as a matter of urgency.

The need for haste is for an American client Lyle Linstrum, who has been developing a therapy to combat obesity. Early trials uncovered an unforeseen flaw that has to be resolved before they can file a patent. A few weeks previously they were given notice that another US firm are intending to file a patent for the antibody claiming they are the first to make the discovery.  Linstrum wants Daniel to go through the lab books to establish the exact date the discovery was made.

Katie Flanagan works as a researcher in blood disorders. When she meets with Rachel, who is on the board of a charity supporting research into Diamond-Blackfan anemia, her daughter Chloe’s blood disorder, a rare and serious condition, they strike up a friendship.

Meanwhile, Daniel is concerned to discover that one of the lab books is missing and it is by all accounts a vital one. And with the failure of two of her experiments Katie is worried that she must have down something wrong and retraces all the facets of her experiment, but still cannot account for the failure. Yet it can only be that somewhere in the process she has made a mistake.  Or is there something wrong in the lab?

Set in Ely, Cambridgeshire, this is a fascinating suspense story, clearly well-researched.  Whilst it is an excellent mystery, it also poses some interesting ethical questions – to what lengths would you go to ensure your child is cured?

Intricately plotted, with some sympathetic characters, well-fleshed out, I was gripped from the first page and heartily recommend this book as a ‘not to be missed.’
------
Reviewer: Lizzie Sirett

Christine Poulson writes I was a respectable academic, lecturing in art history at a Cambridge college before I turned to crime. My first three novels featured literary historian and accidental sleuth, Cassandra James, and my most recent is Invisible, a standalone suspense novel. Something that I didn’t expect when I started writing crime fiction was that other crime writers would be such good fun and so convivial. I’ve made some excellent friends and Martin Edwards is one of them. He knows a huge amount about Golden Age crime fiction – an interest we share – as well as […]