‘The Lost Girls of Rome’ by Donato Carrisi


Happy New Year to you all.  Thank you for visiting this site so frequently, it's good to know that you are enjoying the reviews, well I assume you are as the number of visitors is steadily increasing.  Feel free to leave comments and do please visit the web site, should you be so inclined www.mysterypeople.co.uk

My first offering to start the year is ‘The Lost Girls of Rome’ by Donato Carrisi.  A fascinating story. 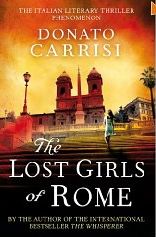 This book is a compelling reading.  The story complex and convoluted as the time period switches back and forth.

The present period covers five days starting when we are party to two men sitting in a café discussing the disappearance of a young girl from her apartment in Rome. We learn that she is the fifth girl to disappear.

In Milan Sandra – a brilliant police forensics expert is still trying to come to terms with the death of her lover David, a photo journalist. A phone call has Sandra questioning whether the death of her partner was the accident she had been led to believe it was.
As the story progresses we learn that the two men are members of the ancient Penitenzeri – a unique Italian team, linked to the Vatican, trained in the detection of true evil. The younger man Marcus is determined to find this latest missing girl before she is killed like the earlier abducted girls. Meanwhile Sandra goes to Rome where her husband died to learn what actually happened to him that resulted in his death. Following in David’s footsteps, Sandra soon comes into contact with Marcus, and also the man who made the phone call that prompted her to look deeper into the circumstances of David’s death.  But can she trust either of them?
The story alternates between the present day and flash backs following ‘the hunter’ an unidentified character.  Atmospheric and spellbinding this thriller is cleverly crafted to keep you turning the pages, offering you a window onto hitherto unknown secrets of Rome. Highly recommended.
------
Reviewer: Lizzie Hayes

Donato Carrisi was born in 1973 and studied law and criminology. Since 1999 he has been working as a TV screenwriter.  The Whisperer, Carrisi's first novel, won five international literary prizes, has been sold in nearly twenty countries, and has been translated into languages as varied as French, Danish, Hebrew and Vietnamese. Carrisi lives in Rome.
Posted by Lizzie at 16:21