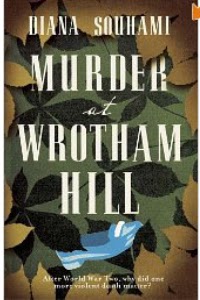 This is a marvelous piece of writing, the story meticulously researched. Murder at Wrotham Hill charts the progression of events and the lives of those involved in the killing in October 1946 of middle-aged spinster Dagmar Petrzywalski.  Her body was discovered by a lorry driver, and only because he saw a shoe lying by the roadside that looked new and would probably fit his wife, especially if he could find the other one.

Dagmar was a gentle person, reclusive and slightly eccentric in her ways, but careful and caring. And it is through Dagmar’s life that we learn of the austerity of life in Britain in the 1940’s. Her killing was the second in a short time as only three months before a young girl has been found raped and strangled, and so a search for the killer swings into action. In charge of the case is England’s first celebrity detective who later became known as Fabian of the Yard. Investigation reveals that Dagmar was known to hitch-hike particularly early in the morning and post war this was normal, as petrol was still scarce and two people traveling in one vehicle was encouraged. That particular morning Dagmar had been going to visit her brother. But her body was found on the opposite side of the road. So where was she going?

Her murderer Harold Hagger's was a real bad apple. Petty crimes, several abandoned wives and other identities, just how did he and Dagmar cross paths.

The progression of the investigation is interesting but the strength of the book lies in the in-depth story of the victim and her killer. A sad and tragic story.  With photographs of Dgmar Petrzywalski, the evidence of the shoe and the string bag. Harold Hagger, the celebrated forensic scientist, Keith Simpson, and history's most famous hangman Albert Pierrpoint, and his wife – hanging must be a lucrative business judging by her full-length fur coat!  The book is divided into eight sections with section eight entitled ‘And After’ where we learn what happened to all the characters.  A full rounded, and excellent account of the murder of Dagmar Petrzywalski.
-----
Reviewer: Lizzie Hayes

Diana Souhami is the author of many highly aclaimed books and biographies and she has also written plays for radiop and television. She lives in London and Devon.
Posted by Lizzie at 00:11