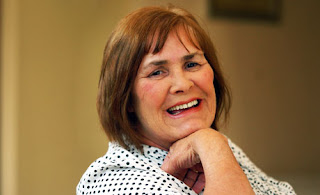 Sheila Quigley was born in Sunderland in 1947 and has lived and worked in the north east all of her life.
After many jobs that included working as a presser in Hepworths tailoring factory, picking potatoes and selling frozen food door to door, she found her true calling as an author.
Sheila became a national news story when Random House acquired her first novel, with major coverage throughout the press and television.
A documentary about Sheila and the making of Run for Home was broadcast on BBC1

Sheila lived on the Homelands Estate in Houghton-le-Spring near Sunderland opposite a field which became the fictional location of the council housing estate in her Seahills books.

Q Sheila, The Final Countdown, the last installment in your trilogy based around Holy island, has just been released. Please tell us about it and your inspiration for the trilogy?
A Hello Lizzie.
The Final Countdown brings everyone together and ties up most of the loose ends. There is not a
lot I can say without giving too much away. One thing, I have a sneaky feeling we have not heard the last of the Holy Island lot.

Q One of the most endearing characters in the trilogy is Smiler, a psychic street kid. You write so convincingly of his powers, I wonder if you’ve personally experienced anything paranormal?
A Hmm, life is strange and yes I’ve had a few unexplainable happenings in my life. All I can say is it’s best to keep an open mind. As they say in these parts, a closed mind learns nowt.

Q Prior to the DI Mike Yorke trilogy you wrote several books featuring DI Lorraine Hunt. What prompted the change to a male protagonist? And will there be more DI Lorraine Hunt books?
A I had just started the first chapter of Stand By Me, the sixth Seahills book, when I woke up the next morning with Smiler, Aunt May and Mike Yorke fully developed in my head and their combined voices shouted louder than the Seahills lot that I just had to tell their story. Which I thoroughly enjoyed doing.

Q You first book was published when you were in your early fifties.  Did you come to writing late, or have you always wanted to write?
A I wrote my first story when I was 11 years old. It was actually a screen play. I started sending work off when I was in my twenties and it kept on coming right back. So after 30 years I decided to again write a screen play, a comedy drama set in the north east. The day it arrived on the agent’s desk he phoned me and said, This is brilliant but would you write a crime novel set in the North East.
Would I !
I went straight to my type writer with no idea what to write when Run For Home by Lindisfarne came on the radio. That was it. A fantastic title. And the story flowed from there.

Q I read on one site that  ‘Sheila Quigley is the north east's most popular crime writer. Rising to fame in 2001 through a fiercely contested auction for her first 2 books, Run for Home & Bad Moon Rising.’  How did you first get published and what was the auction?
A It was actually 2003 Lizzie. My agent phoned me a week after I had sent the finished Run For Home to him and said the book is going out. I was a bundle of nail chewing nerves. Eight publishing  houses offered deals and I got to know at 2.30 that day that Random house had snapped the rights up.

Q How amazing. So how did the documentary on Run For Home come about?
A  About 2 days after all the publicity I got a phone call from documentary maker Chris Terrill. I had no idea who he was and - slightly shocked that anyone would want to -  turned down    his offer to do a documentary about me. Five minutes later the agent was on the phone.
OK Ok I said, still wondering what I had let myself in for. But it turned out to be a brilliant year, Chris was fantastic and we all had a great time. I still remember him saying that there was so much footage on the cutting room floor because it was not supposed to be a comedy.

Q Do you have a regular writing day?
A Every day is a writing day. As soon as I’ve fed me and the dogs, that’s it, I’m writing, with of course the usual breaks for life. My car is known as Mam’s taxi, Nana’s taxi, and any bugger else want a lift.

Q. When starting a new book do you always have a clear view of how the book will work out, or does it grow organically as you write?
A I have no idea what is going to happen and that’s the way I like it, I enjoy finding new things about my characters as much as my readers do.

Q When embarking on a new book what area of the book challenges you the most?  And  do you have a favourite part of the writing process?
A Probably wondering who can get away with murder the longest. And love all of the process, especially when something you never planned just drops right into place.

Q With The Final Countdown being the last installment in the trilogy, will we be seeing any more of DI Mike Yorke? Or something completely different? What’s next, Sheila?
A Never say never, so many people want to know more of Smiler and the rest of them. But I’m definitely back to the Seahills for the next book Stand By Me.

Thank you so much, Sheila for taking the time to talk to us. I look forward to reading The Final Countdown.
Thank you very much for having me Lizzie, and may I wish you and your readers all the best for the new year x.

For more information about Sheila visit her web site
http://theseahills.moonfruit.com