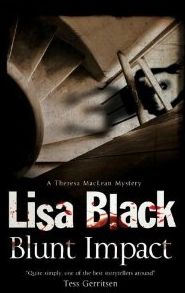 The discovery of the body of a young woman found at Cleveland building site early one morning looks initially to be a suicide, but forensic scientist
Theresa MacClean, has her doubts.  A number of unexplained anomalies raise questions that she wants answered before she is sure.

Eleven-year-old Ghost has a habit of nocturnal wondering when she can’t sleep, and had learned to exit and enter her home by the window silently. On one of her night rambles she is witness to the sight of someone being pushed from a high building under construction.

The young woman was in fact one of the construction workers and Theresa along with the police detectives assigned to the investigation Angela and Theresa’s cousin Frank have many lines of enquiry – the one the construction company would prefer is suicide, but could the victim have discovered something fraudulent that someone didn’t want known, or did she fall?  Ghost says the woman was pushed, but cannot provide a description, but only identifies as a shadow man!  But the killer is already aware that there was a witness, and is determined that she will not live to identify him.  Will he catch up with Ghost?

As the investigation proceeds I tried in vain to work out whodunit!  There are several threads running through the story and quite a cast of characters.  Along side the investigation I also enjoyed the personal relationships, but nothing prepared me for the nail-biting climax.
------
Reviewer: Lizzie Hayes 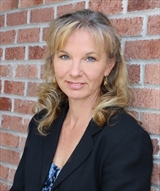 Lisa Black  is a latent print examiner for the city of Cape Coral, Florida, police department, working mostly with fingerprints and crime scenes.  Prior to that she worked job as a forensic scientist at the County Coroner's Office, in Cleveland, Ohio, analyzing gunshot residue on hands and clothing, hairs, fibers, paint, glass, DNA, blood and many other forms of trace evidence, as well as crime scenes.  She has lectured at writer's conventions and appeared on panels. Blunt impact is her fourth book featuring forensic scientist, Theresa MacClean

Photo by Susan M. Klingbeil
Posted by Lizzie at 13:05