‘Get Rich Quick’ by Peter Doyle 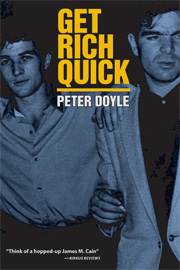 This novel features the exploits of Billy Glasheen, a small-time hustler and would-be music impresario in Sydney in the 1950s at a time when the city was controlled by an ‘unholy trinity of crooks, bent cops and politicians on the make.’ It begins with the murder in 1952 of Charlie Furner, an enforcer for one of Sydney’s biggest criminals, for which Ray Waters, the toughest and most corrupt cop in the Sydney police force, attempts to frame Billy, and ends in 1957 with the unmasking of Furner’s killer. But most of the book is about the Sydney scene in the years between with Billy’s dodging and diving as he becomes involved with right-wing Croatian gangs backed by some Australian politicians and shadowy US influences, jewellery heists and the changing music scene of the time, although Waters is a murky presence.

Get Rich Quick is very well-written, the author teaching writing at Macquarie University, Sydney. It richly deserved the Ned Kelly Award for First Crime Novel which it received on first publication in 1996. Billy is sharp and clever, an entertaining and attractive character full of schemes which never quite come off. I wonder if the title is actually ironic - Billy might have become richer quicker and with less trouble if he had taken up, say, tax consultancy or investment advising. But then he would never have gone on tour with Little Richard and Eddie Cochrane so perhaps he, and we, are better off after all.
-------
Reviewer: Radmila May
Other books by Peter Doyle: The Devil’s Jump, City of Shadows, Amaze Your Friends and Crooks Like Us

Peter Doyle was born in Maroubra, in Sydney’s eastern suburbs. He worked as a taxi driver, -musician, and teacher before writing Get Rich Quick, which won the Ned Kelly Award for Best First Crime Novel in 1997. Its sequel, Amaze Your Friends, won the Ned Kelly Award for Best Crime Novel in 1998, followed in 2001 by The Devil’s Jump, the third book in Doyle’s Billy Glasheen series. Doyle lives in Newtown, where he divides his time between writing and teaching. He is also a part-time curator at Sydney’s Justice and Police Museum.
Posted by Lizzie at 22:32