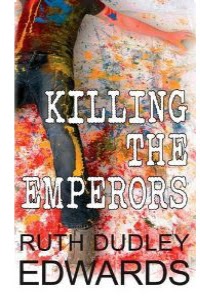 Published in the UK by Allison and Busby,
November 2012.
ISBN: 9781590586389
This is the latest in the hilarious satirical series featuring the Baroness Troutbeck. In this series, Dudley-Edwards, through the eyes and voice of the wonderful Baroness Troutbeck, takes an amusing swipe at different establishments.  Killing the Emperors  takes on the world of modern art, and points a finger in the direction of the likes of Damien Hurst and Tracey Emin. Someone out there, namely the Russian billionaire, and art lover, Oleg Sarkosky doesn’t like this one little bit, so he has Troutbeck kidnapped, along with others who are high up in the art world. The victims are then kept Big Brother style by their captive- and here the fun and games continue. Meanwhile the Baroness’s side-kick, Robert Amiss has discovered her missing and is working with the police to find them. But will he succeed before the body count starts mounting? Enter the SAS.
Dudley Edwards is a master of satirical comedy writing. The Baroness Troutbeck is a wonderful invention and as a central character provides most of the humour. She is both classy and classless. I would love to see her in a cinematic form. As I laughed my way through this story, I thought either Joanna Lumley or Alison Steadman would be a perfect choice to bring her to life. This hilarious series, that points its funny finger at a corner of society, comes highly recommended, they are all very entertaining , and this is one of her best.
-----
Reviewer: Linda Regan

Ruth Dudley Edwards has been a teacher, marketing executive and civil servant and is a prize-winning biographer as well as an historian, journalist and broadcaster.  The targets of her satirical crime novels include the civil service, gentlemen’s clubs, a Cambridge college, the House of Lords, the Church of England, publishing, literary prizes and politically-correct Americans. In 2008 she won the CrimeFest Last Laugh Award for Murdering Americans.  www.ruthdudleyedwards.com

Linda Regan is the author of six police procedural crime novels. She is also an actress. She holds a Masters degree in critical writing and journalism, and writes a regular column, including book reviews, for three magazines. She also presents the book-club spot on BBC Radio Kent. She is an avid reader, and welcomes the chance to read new writers.www.lindareganonline.co.uk