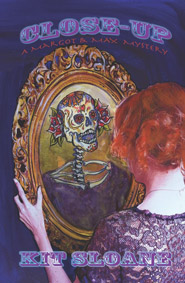 Charismatic Max Skull is in the midst of making his latest film, The Dead, his partner film editor Margot O’Banion doesn’t have much to do at this stage, her works starts when the film is in the can, so Margot spends time getting to know everyone on set. Including, fiery Carla Devine the make-up artist.

Relaxing at home watching a news broadcast, after a day of filming Margot spots former television actress Verna LeTrent, famous some decades back for her role in a popular TV Crime series The Family which ran for nine years. It appears that Verna has had a fire at her house.  Max thinks that she looks so good he will offer her a cameo role in his film.

When one of the cast is murdered and a friend goes missing, things begin to look decidedly suspect.  As in previous books Margot gets herself inadvertently in some sticky situations.  But just what is the significance of a piece of footage and a scrapbook?

With many interesting and well-defined characters, all who have secrets, the story is intriguing and keeps you turning pages eager to know what happens next. Kit Sloane is master class at creating and maintaining tension.  This is the ninth book in the series and I have enjoyed everyone of them. Whilst always being a big Margot fan my liking for Max grows with each book.  Highly recommended.
-----
Reviewer: Lizzie Hayes
Earlier books in the series are Final Cit, Bad Actors, Last Words, Grape Noir, Extreme Cusine Location, Location,  The Fat Lady Sings and The Magicians. 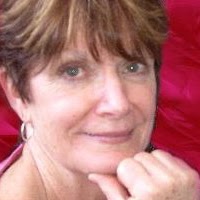 Kit Sloane  is a graduate in Art History from Mills College, Oakland, California. She is the author of the Margot O’Banion & Max Skull mystery series, Kit Sloane’s offbeat stories chronicle the intricacies of Hollywood filmmaking from the point of view of her protagonist, feature film editor Margot O'Banion and her significant other, director Max Skull.  Kit has published short stories and many articles on the art of writing and the writing business. She served as first fiction editor for Futures Mysterious Anthology Magazine. She especially enjoys lecturing about the writing world and mentoring new writers. She is a long time member of Sisters in Crime, Mystery Writers of America, and Mystery People of the UK and was named one of Mills College’s Literary Women for 2007.
Kit and her professor husband live on a small hilltop horse ranch in Northern California's sublime wine country.
Posted by Lizzie at 00:19